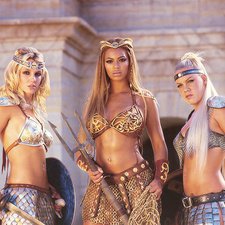 just a few of the local artists who supported liberal snowflake candidates this year! Much love <3

I'm not sure why we're doing a Russia show during our election... there's absolutely no relationship between the two...

DJ Kim subs the show for today - YCT and campus protests - Words of support through music that fueled revolutions from Palestine to Latin America.

Angsty anguish from the 70's, 80's, and 90's! We got riot grrrl stuff, metal rap stuff, British punky stuff, and some even older international stuff!

Episode 2: The Pussy Grabs Back

Dedicated to all the ladies scorned by the Patriarchy.

Episode 1: Home Soil This week is dedicated to North American artists who are airing their grievances about the current state of affairs and inspiring movements the only way they know how. Go to @NPRKVRX on Facebook for more info and archived shows!