As doors opened at 7 pm, the long line started moving along. The nightclub staff was very efficient and started walking through the line checking IDs so the entrance process was faster. Inside the venue, a small table with merch was available to the public, and once again the staff showed insane efficiency as no one spent too long waiting in line. Antone's offered tables and stools for the crowd though most decided to stand by the stage. 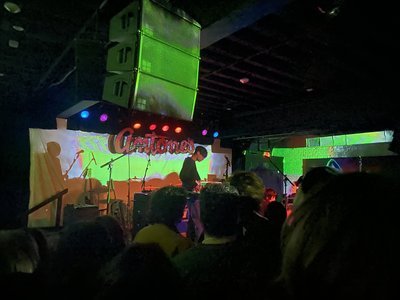 The show started on the dot, at 8 pm, by 7:59 the artists had already taken a position on the stage. Bassist and vocalist Alex Brady took the microphone first and began singing "Lochness." It was heartwarming for a relatively small band to see the crowd's passion for them. Groups were jumping, singing together, head banging, and overall having a great time.

Keyan Zand, guitarist, and vocalist, took the microphone for the second song, and throughout the concert, he and Alex alternated on the spot. Despite not singing, drummer Dillon Lee also caught everyone's attention.

The artists did not engage much with the public, though I don't think that hurt the performance. All three of them were passionate about what they do and that energy was very much reflected in their audience.

As a big fan of instrument solos, I was happy to see at least one solo of each (and wow....they were GOOD!).

After singing what was supposed to be their last song, the artists offered to give the crowd another one. Obviously, we all screamed in agreement and enjoyed another 5-10 minutes of julie! The entire performance, as expected for an opening act, was around 40 minutes long, and after leaving the stage all three band members stepped outside to meet their fans. I haven't personally met many artists in my life, so now the bar is set very high for anyone after them. I had the loveliest interactions with them (and got told I was cool). Definitely the cherry on top!

Walking into the venue I listened to a few of their songs, and was excited to see what they could bring to the table. After leaving, I can easily say they got another fan!