Many introductory psychology courses begin with a discussion of a key concept: priming. The main gist of this idea is that our past experiences psychologically affect us in ways that we don’t even know. An example provided in UT Professor Gosling’s class is that if you drink a warm glass of water versus a cold one, there’s a chance you’ll act more “warmhearted” towards others; this has been seriously shown in a research study. Well, what you do in the past has a tendency of influencing how you act in the future. By applying this ideology to the work of a musician, it can be seen that an artist's past highly influences the music subsequently made. 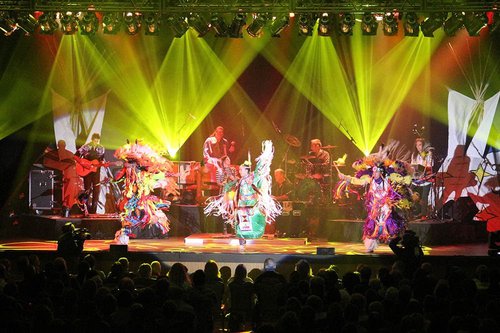 There are so many outstanding musicians in the Contemporary Native American music scene. Many of the rising and established artists in this unique genre can be found in the Spotify playlist above. To really showcase how diverse the Native American music scene is, the playlist is ordered from pieces that are highly mixed with other genres, all the way to pieces that are solely traditional in nature.

On this premise, let’s start with one prominent figure: Martha Redbone. Last November, Redbone actually visited UT Austin's Briscoe Center for an event entitled "A Conversation about American Roots." It was here that I witnessed what would later inspire this writing as the soul singer gave a powerful lecture on her journey as a musician. What makes her perspective so extraordinarily unique, however, is her cultural background: she is both half Native American and half African American. She explained that while the musical segments of both cultural backgrounds tend to contrast quite a bit, anything is possible through a "brilliant collision of cultures." The "ethnically blended" influence in her music, as she calls it, came from the gospel singing of her African American father and the resilient spirit of her mother's Cherokee, Shawnee, and Choctaw culture.

Redbone’s music aims to take her powerful cultural background, and use it to give light to important modern-day concepts, including social justice, bringing back traditions of the past, connecting different cultures, and ultimately, celebrating the human spirit. However, as described at the beginning of this article via “priming,” every artist has an underlying motivational factor for their work. For Redbone, this motivation has been the story of her ancestors. During Redbone’s lecture at the Briscoe Center, she told the heart-wrenching stories of her ancestors—this included how they were forced onto the Trail of Tears and how their horrific experiences had been passed down through generations of her family. Being part of two backgrounds that are commonly marginalized in modern-day culture, Redbone feels a heavy obligation to ensure the plight of her cultural groups is heard.

An analysis of Redbone’s work wouldn’t be complete without a brief overview of one of her songs, so let’s focus on the one that brought her national attention, “Drums.” This song accentuates how much injustice the Native American community has faced ever since the colonization of the Americas. Prominent lyrics include “Well, they’re going to educate me to the white men’s golden rule,” “She comes when they call her Billy, even though she’s got an Indian name,” and “Will they think me black or Indian, a quarter blood or just some half-breed?” Each one of these lyrics points to different instances of racial discrimination that Redbone or her ancestors experienced. Redbone effectively ties in her African American roots through her delivery of this song, which beautifully takes a gospel form. All in all, it can be seen that Redbone protests the previous injustices her people have faced through “an organic, gorgeous feast for the ears and mind” (Dusty Wright, Huffington Post). 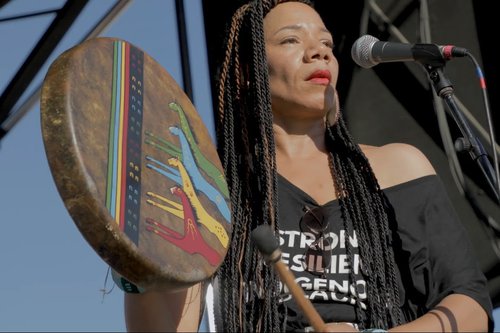 Another artist who has become one of the most highly acclaimed Native American singers of this century is Joanne Shenandoah. She is truly a master of multiple trades, exemplifying unbelievable expertise in her role as an educator (she founded the Hiawatha Institute for Indigenous Knowledge) and through the immeasurable emotion within her music. She’s been called a “bridger of cultures,” due to the valuable attention she’s given her Native American community through performances at the White House and Carnegie Hall, among other prominent places.

To further, see Shenandoah being a “master of all trades,” you don’t have to stray too far: her childhood was a perfect example of this. While she was a child, Shenandoah spent a great amount of time practicing various forms of vocal tribal music and learning how to use many instruments, including the flute, piano, clarinet, guitar, and cello. Quite rapidly, her skills gained traction and grand recognition. By the 90s, Shenandoah had created multiple soundtracks for different TV shows, appeared herself on these shows, and done performances with accomplished musicians throughout Europe and America.

Shenandoah’s music has one clear goal: preserving Iroquois culture. This can be seen both through her musical pieces—often described as a “Native American trance” (Robbie Robertson)—and through her other operations, including confounding Round Dance Production, a non-profit educational Native American foundation. The rewards and recognitions Shenandoah has received since then have been endless, including acclimations of “Native American of the Year” (in 1993), records on multiple music labels, and many others.

Again, an analysis of Shenandoah would not be complete without truly stepping into her work, KVRX style! Similar to how Martha Redbone’s work emphasized the importance of recognizing the violence and persecution against Native American peoples, so does Shenandoah’s work. Through an analysis of one of her best songs, “To Those Who Dream,” she repeatedly says this line: “For so long I dreamed a dream where the fighters lay down their guns… where the people became one.” She further emphasizes her dream through the ending of the song, where she states “beyond the sky they dream.” This shows not only how important this cause is to her, but to the entire Native American state, as she details the all-encompassing nature of her dream through multiple metaphors and analogies in the song. Ultimately, Joanne Shenandoah has led the Native American community through not only her music but through causes directly linked to her music, such as an essential educational center. Her “deep, powerful voice” that so many acclaim is not only attributed to her music but also her genuine compassion for her own people. 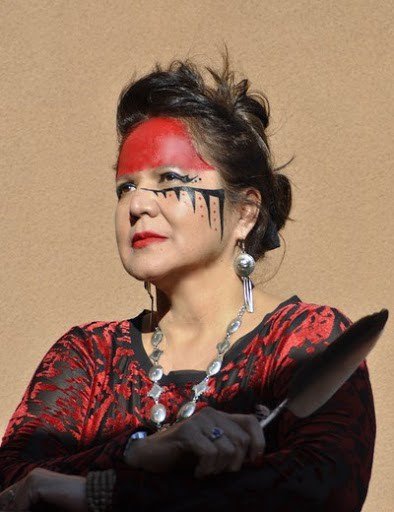 Joanna Shenandoah tends to take a more traditional approach towards expressing her Native American culture, and that’s what has earned her so many awards and praise! Credit: Jane Feldman.

Recall that the psychological topic of priming was mentioned at the very beginning of this article. At this point, there may still be some confusion as to how this relates to the Native American music scene. For a solid explanation, we’ll take a brief look at a contemporary Native American artist who has chosen to remain at the very left side of the spectrum. He works on genres of music that at first glance, seem to have no association with Native American culture.

Our main example can be seen through Chuck Billy, a singer in the thrash metal band Testament, who is of Native American descent. Some fans have stated that while he does not directly intend to discuss topics related to Native American community struggles within his music, they seem to be hidden in multiple lines. A clear example of this can be seen through one of his pieces, titled “The Crownless King,” in which he repeatedly sings to defy to “tear down reminders of a crownless king.” Although Billy has never commented on the song’s original intent, many fans still interpret “The Crownless King” to be a reference to the American government which has committed many atrocities against Native American peoples.

However, even if it is not known for sure whether Chuck Billy really meant this, the concept of “priming” still brings us to the conclusion that Native American history’s influence is very likely to be present in his music. Recall that “priming” refers to the idea that one’s own personal life experiences will affect their present. In this case, since Chuck Billy is of Native American descent, his past is always with him and as an individual, his background causes him to be more likely to discuss issues of political injustices. 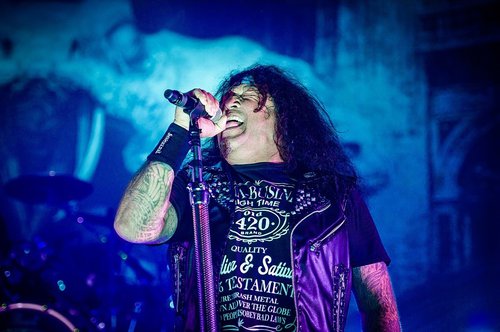 Chuck Billy shows us that social protest can be done in any way, shape, or form. While many think that efforts for Native American cultural preservation are only done through traditional music, Billy clearly defies that logic in this image. Credit: Markus Felix.

Ultimately, contemporary Native American music is one of the most progressive segments of the modern industry. These artists mentioned have an undeniable connection to their past and a dedication to preserving their culture in a world filled with influences trying to erase it. All of them are united in this cause, but the central beauty lies in their key variances: they all take a different musical approach in attempting to achieve this. Some go for the traditional like Shenandoah, others go for gospel, like Redbone, yet others go for heavy metal like Billy. And there’s still so much more: this doesn’t even entail a single percent of the efforts being made by numerous Native American musicians to preserve their culture and honor their culture.