Deep in the heart of Texas, an energy vortex swirls. Enchanted Rock, a massive slab of pink granite, lies at the intersection of ley lines, and three outcroppings of the rock form a triangulation. The phenomenon remains known for healing power (and gardening), which struck Benjamin Violet when returning to his home state after a decade away.

Born and raised in South Austin, the 31-year-old frontman and mastermind behind Pelvis Wrestley spent much of his adult life living in Seattle, where he married in his early 20s. He felt disjointed in the city’s “cerebral and heady” music scene with his theatrical pop trio ANDY. Despite previously feeling dead set on never returning to the Lone Star State, his bandmates convinced him to move back to Austin with them in 2016 following his divorce.

“I felt like an absolute drop, just like a magnetism back and that was reflected on the road trip that I took, like driving myself and all of my earthly possessions from Seattle to Austin, which fit very neatly into a small car,” says the Courtney Love defender.

That transformative drive took him through the stunning beauty of West Texas, which further reaffirmed his decision. 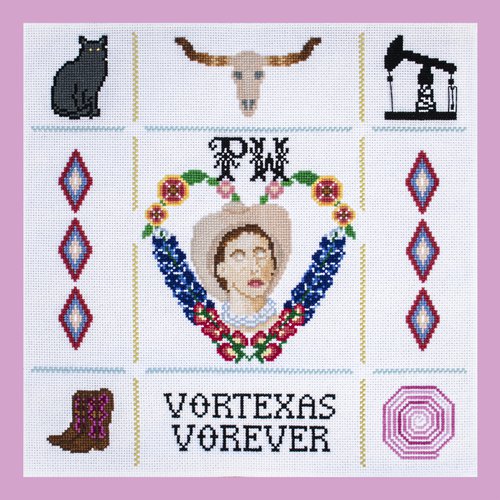 “Like the diversity of terrain and wildlife, it feels very wild, but not entirely unkind,” he says, adding that the nature reflects the Texas mindset. “You know, I don't care what you're doing. Just don't bring it out over onto my lawn.”

Playing off “Texas Forever,” Pelvis Wrestley’s debut album, Vortexas Vorever, released this September, blends country elements and narratives with synth-pop stylings. Down to the homely cross-stitched album artwork that features a longhorn skull, a pair of cowboy boots and an oil well, the album manifests the band’s self-described “glam senselessness and country sensibility.”

Cosmic keys zip alongside violin riffs. Earthy textures sparkle with danceable guitar lines on “Laurels” and “Try Your Hardest.” In “3 Stones on a Hill,” Violet plays an Omnichord. There’s exciting talk of soon throwing a pedal steel guitar into the mix.

Violet achieves the unique sound with the added prowess of guitarist Santiago Dietche (Daphne Tunes), drummer Sarah Schultz (Sun June), fiddler Behnam Arzaghi, and synth player Hannah McVay. He makes for a charismatic frontman with glam, David Bowie-esque vocals, an artist he studies with laser intensity and credits as “one of our great guardians.”

Schultz recalls briefly meeting Violet about a year before PW’s 2018 inception at a Halloween Hotel Vegas show and feeling awestruck by his presence. “[He wore] this frog prince costume where he had crafted this frog head paper mache thing, and it just looked amazing, says Schultz. And I was like, ‘Oh my gosh, who is this person?’”

Back in Seattle, his friend Lyndsay Dyk nurtured a new love for country music. Growing up in rural Oregon on an Americana diet, she knew her stuff, introducing him to trailblazers Bobbie Gentry, Loretta Lynn, Patsy Cline, Dolly Parton.

“Ben was a willing listener, and I think both him and I have the tendency to get obsessive, so it was easy to share everything I was learning and loved about the records I was getting,” shared Dyk via email. 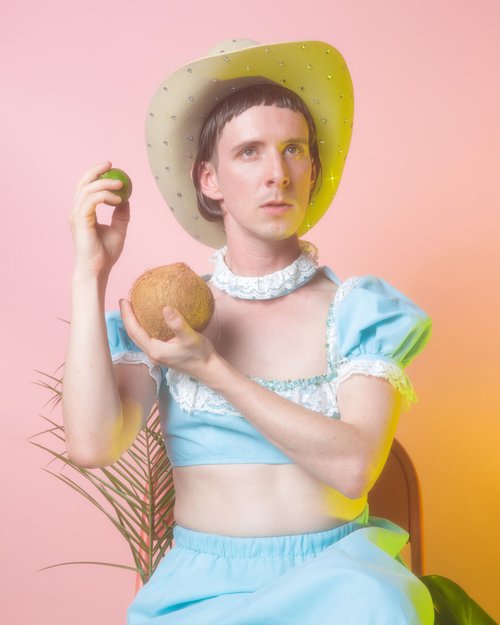 Violet grew up in a conservative Christian environment that sits at odds with his ideals and queerness.

“Especially after the 2016 election, it started feeling very important to me to redefine what an American identity looks like,” he reveals. “There's this idea that to be American is to be brash, rude, a bigot, etcetera. That causes a weird mental-spiritual dissonance, because that's not who I want to be, and that's not the world I want to live in. At the same time, this is the country that I was born in — this is the country that's home.”

The Courtney Love defender explains how that exploration “felt natural to do that through the lens of country music, even though it's bizarro country music that is hard to actually fit into that genre.”

Throughout Vortexas Vorever, he recontextualizes familiar Western tropes like seeking out wide open spaces. Amidst the twangy riffs of “I.L.M.C.,” an acronym for “I Love My Country,” he emphasizes land and people over nationalism, asserting a desire “to set a little fire and feel a little freedom.” In the wistful “Susanna,” riding on “the road that don’t ever end” transforms into a safe haven.

In recent years, the growing popularity of LGBTQ+ artists like masked crooner Orville Peck and Nashville-styled Katie Pruitt have promoted queer perspectives in a genre with an establishment known for gatekeeping marginalized voices. Violet hesitates to claim a place at that table himself due to Pelvis Wrestley’s eclectic sound.

“But at the same time, isn't that kind of what queerness is all about? It's not being necessarily one thing or the other, but being just ready to embrace being in between things,” he muses.

Vortexas Vorever spins through such liminal states between contrasting ideals: freedom and home, despair and hope, heartbreak and healing. As much as the record represents his literal homecoming to Texas, it also details Violet’s physical and spiritual return into himself following his divorce.

Contextualizing the experience within a relationship theory he read, he explains, “You're basically building like a mutual delusion about the world that you live in together. You build a reality around your relationship.”

“When the relationship ends, the person that is broken up with — which is me — ends up living in a world that doesn't exist anymore. It just feels very dislocating and decentralizing and, yeah, I was spiraling real hard, while trying to teach myself to take care of myself and take health seriously.” 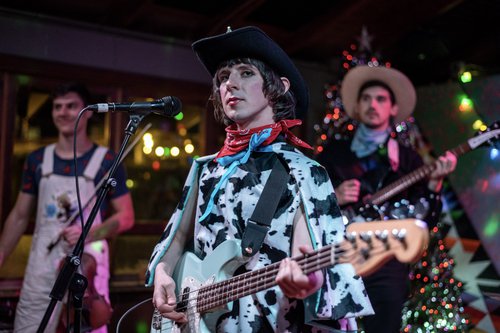 He developed a first-second person relationship with himself, “a very special and intimate” time spent interrogating his self-doubts. Throughout Vortexas Vorever, he wrestles, then reconciles, with this shadow self.

In a filmed performance at the Far Out Lounge this August, Violet embodies this moment of reckoning during “Valley” over glitchy warbles and contemplative drums. Dressed in a cow print dress with a stark red “PELVIS IS KING” emblazoned on the back, he leads a melodic chant with all the weight of a hymn: “I waited too long, for sickness and health / I never had nothing until I had myself.” Blooming into himself, he contorts his voice into a howl for the final repetitions before wavering on the last word, eyes pressed together.