By: Matthew Collier (aka DJ Quell)


Thor Harris is a musician, author, carpenter, and sculptor who is best known for his work as a percussionist for the bands Swans and Xiu Xiu in the 2010s, using his many talents to contribute to heavy, intense musical experiences that these bands have become known for. When pursuing his own musical ventures, however, Harris has taken a much more calm and meditative approach with a heavy emphasis on the xylophone and woodwind instruments; this approach has led to him making plenty of beautiful rhythmically driven music both by himself and with all manner of collaborators, including his band Thor & Friends. His musical services were put to a significant test in 2019 when independent record label Joyful Noise Recordings commissioned him to be their Artist in Residence for the year and record six albums in one year. Rising to the task, Thor enlisted the help of collaborators old and new to put the albums together, and the music that was produced is what I’ll be examining in this review of Thor’s very busy 2019. 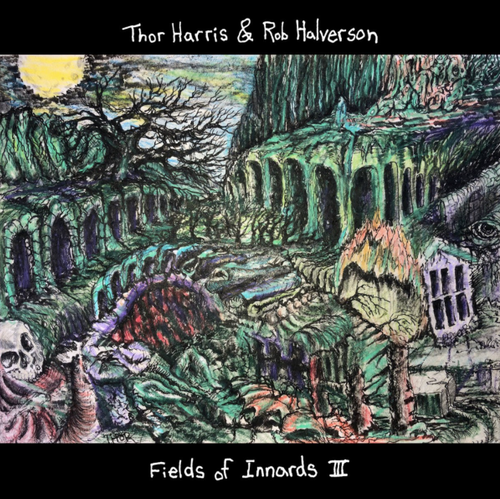 According to Harris, the original Fields of Innards album had, “...no songs, just layer upon layer of simple melodies and rhythms.” This approach to “songwriting” appears on the opening and closing tracks, where a pretty loose assemblage of xylophones and flutes first lilt for a few minutes without a definable mood and then are retooled to a much more upbeat tune, but it’s notably absent for the rest of the songs on the album, as the songs range from urgent, digitally distorted drum-heavy songs to large scale ambient pieces that are filled with reverberations of gongs and strings without a rhythm or melody to be found. The way that Harris and Halverson allow sounds to not only enter the spaces of the songs but to fill them out with their full range and then continue to subtly introduce more is incredibly hypnotic, as if the songs are building themselves in a more natural way than when they were just stacked together in the past; there’s a tangible development made here that feels like the songs are searching for something as they progress, and there are a few emotionally stirring moments in the back half as the tension between the driving drum-based songs and the loose bell/gong-based songs are resolved with both elements uniting in various ways in the final three songs. 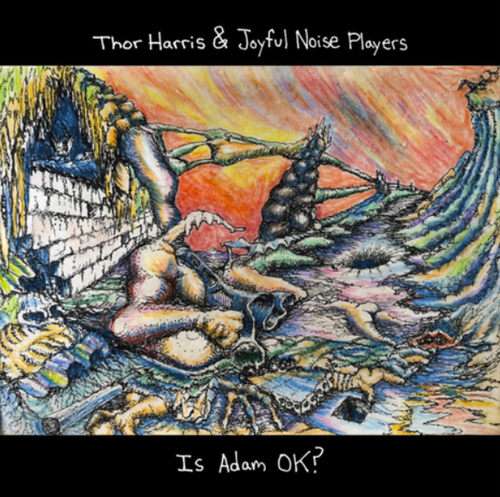 This album, performed by Harris, Greg Saunier of Deerhoof, and a menagerie of musicians working with Joyful Noise, consists of only three songs, so I’ll tackle each one of them in this review.

The sound of rain and several pianos playing different rhythms and notes open the 22-minute-long title track, which, as you might expect from its length, grows to be filled by a large number of interjections, instruments, and improvisations. The organ falls in and out, a much louder drum set bursts in and synchronizes with it, and howling screams fill the air where beautiful singing once hung; this is no Fields of Innards III, rawness is the main draw or repulsion here, as Thor lets a small army of instruments work out various passages of beauty and intensity with little structured direction to be found at first. When the music starts to eke out a very oblique path through the bits and pieces it repeats over and over, it opens up a lot more, the open space the piece is performed in letting the sound expand in a lot of very bright and exuberant ways as it progresses. This is a very upbeat song, and its length and repetition allow you to absorb its positivity to a great degree, so I’d say it’s definitely worth the hefty length it asks you to stick around for.

Immediately, “Kindest Regards Mr Mapfumo” diverges from the previous song by starting off with a very tinny, almost Kraftwerk-esque electronic drum beat (according to Thor, this was supposed to sound like Steve Reich but ended up sounding like Thomas Mapfumo). The xylophones and organs layered on top of this beat make it sound like it’s an electronic song, which is strange considering they were recorded as they were performed over the beat, but it’s a pleasant strangeness, making a New Age sound with these elements and adding a nice baseline under it to fill it out completely.

The closing track, “Grief Comes in Waves”, is very unsettling, with a very dark arrangement of horns looming over the unusually discordant tapestry of xylophones, bells, and vocals that are blackened by their presence. After the two upbeat songs preceding this one, this feels like a cold wave washing over you, with a real ghostly atmosphere being conjured up by how unorganized and improvisational the instruments sound in comparison with past arrangements; at times, it brings to mind some of Scott Walker’s later work like Tilt or The Drift, profoundly haunting albums that used ambiance as a tool to make the listener uncomfortable while it slowly unraveled its sparse arrangements. “Grief Comes in Waves” takes the opposite approach, filling up the ambiance with a barrage of sound that makes the song feel panicked and frightened as it closes out the album. It’s a left-field turn that really shocks, but it’s a very memorable closer for an album that didn’t feel threatening in the slightest until suddenly it did. 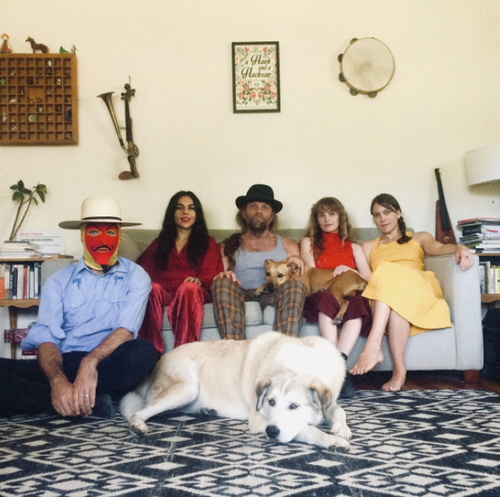 This is the third album released by Harris’ band Thor & Friends, composed of Thor, Sarah Gautier, and Peggy Ghorbani. The group was formed because Harris found the prospect of playing his brand of meditative, repetitive music to be very scary, and he found confidence and comfort in having bandmates to back him up as they had when he had worked with Swans from 2010 onwards; the confidence they brought him seemed to show in the music, as Thor & Friends produced some of the most focused and acclaimed music of Harris’ career, a trend that continues on this album. 3 is an album full of grandiosity, with the increased use of strings and electronic instrumentation from synthesizers to a few electric guitars signaling a focus on a more ambitious and cohesive musical structure than ever before. Gone are the layered rhythms of Fields of Innards, replaced by the singing of former Swans alumnus Jarboe and current Swans frontman Michael Gira, both of whom bring an incredible amount of beauty and awe to the songs here by using wordless vocalizations to accentuate the carefully assembled tapestries of xylophones, horns, organs, and synthesizers and bring out the most clearly emotional songs in Harris’ oeuvre. Gira’s intimidating drawl paints a dark mark on the foreboding “Tucson”, and Jarboe’s soothing coos brighten up the gorgeous “Falling”, a huge highlight in Thor’s discography. Both songs represent the album in microcosm, as together they create images of picturesque loveliness and unsettling coldness, and the rest of the album is built around introducing and reincorporating elements these songs use to the fullest potential. 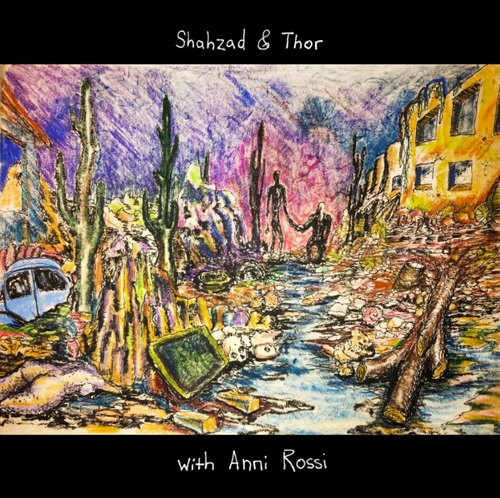 For this album, Thor enlisted the talent of Shahzad Ismaily, biochemist, and self-taught musician, to develop a very bright album that uses Ismaily’s talents with instruments like the accordion (which as far as I can remember hasn’t appeared on a Thor album) to conjure up some new sound palates for Thor’s 2019 albums. The highlights of the album are: “I’m OK to Drive (Patience=Genius)”, which uses a flute tune that appears late on the opening track as the basis for a winding saxophone line that plays over said accordion’s wheezing to build a very simple and mystical tune, and “A Walk in the Rain”, which sounds a lot like the introduction to Xiu Xiu’s “Muppet Face” with a cacophony of bright bells sounding off around a few quiet piano notes--but overall the songs on this album are pretty mellow. Several songs almost sound like easy listening music with a Middle Eastern flavor to the instrumentation (especially in the strings), and the overall mood isn’t very emotionally taxing until the final track, “We Look to Anni (She Knows)”, a very melancholy finale that softly mixes pianos, flutes, and strings to end the album on a somber note that, while affecting, doesn’t fully align itself with the rest of the album’s mood. It’s engaging while it’s on, but it’s not as grand as the best moments on Is Adam OK? or 3, and it feels like it isn’t trying to be as grand anyway, so adjust accordingly when giving this one a listen. 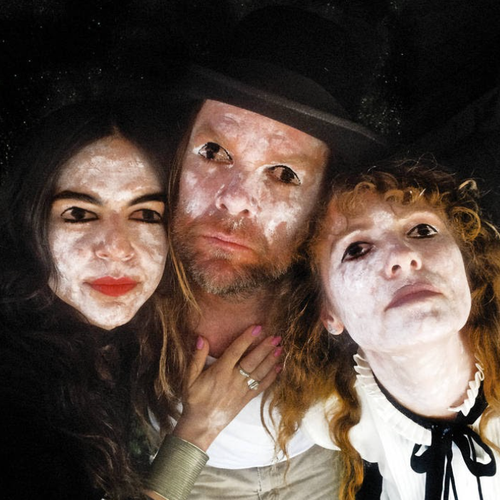 The second album from the Thor & Friends line-up from 2019 uses much of the same instruments from the previous album, making its status as a sequel seem even more clearly stated than the title, which is literally just the next number after 3. Unfortunately, that sequel status comes with some diminishing returns, as those returning instruments start to become pretty samey after three albums of their usage coming out in one year. "Uber Driver" with its usage of Christopher Cundey's saxophone playing over a recurring drumbeat that build up to multiple miniature crescendos adds a lot of flavor to the album, and "The Other Last Straw" actually has a bit of an Aphex Twin sound to its heavy plucking of strings and four repeating piano notes, but overall, there's not much to say about this album. It feels like an extended epilogue to 3's more grand and focused vision, which isn't bad in theory but isn't very interesting in practice either. 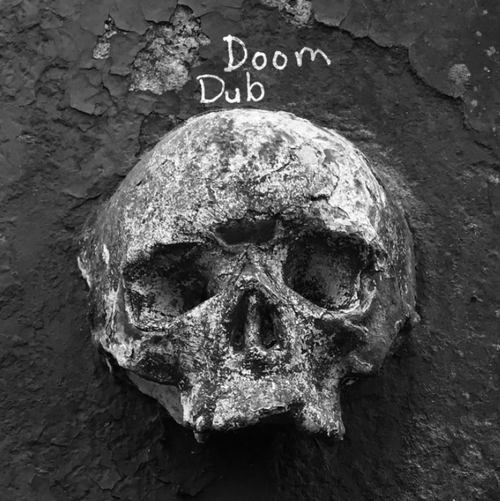 For his final release of 2019, Thor Harris took a hard left turn and made an album where almost every element is touched up by or produced with electronics. "Ass Tiger" and "Halloween Kaka" are extremely intense electronic jams, propelled by bassy electronic beats and erratic pianos that don't come together as much as they fall on top of each other in avalanches of sound; "Return of the Ass Tiger" and "Big Dan" refine these sounds in some ways, but they also make them harsher and more alien by pushing together Pink Floyd-esque guitar riffs, Autechre-esque electronic soundscapes, and extended droning passages that are as intimidating as they are fascinating. The closest that the songs get to the previous albums in Thor's 2019 is the brief "Fly on the Wall", which has a few flute notes played over a bit of spoken word and a sample of a cat meowing that lasts for under two minutes. If you've been completely on board with Thor's music before this and are uninterested in electronic elements being put front and center, steer clear from this one. However, I personally think that a drastic shift in direction is just what he needed to finish off the year, and it's very well executed for something so foreign to what he's released so far to my knowledge.