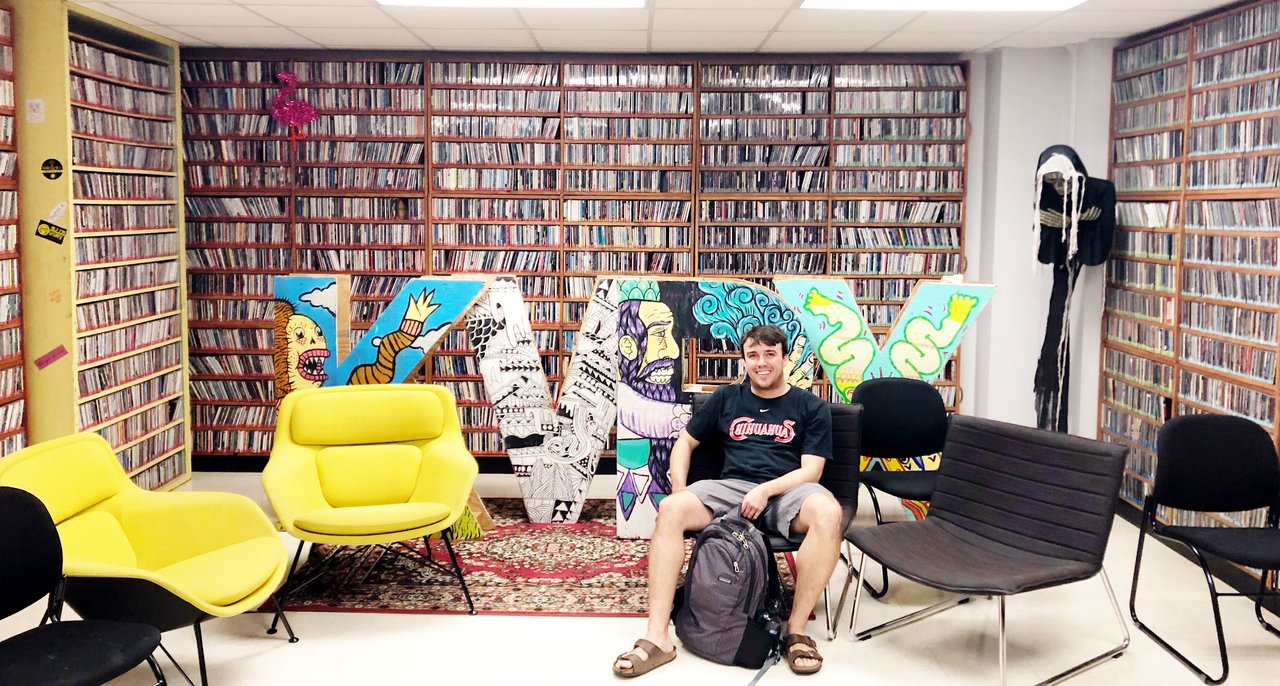 A good friend from my hometown was a KVRX alum. I would frequently guest on his show and fell in love. When I came to UT for my graduate degree, KVRX was the first organization I enlisted in.

Having my parents on the show. That or when that guy interviewed Nardwuar - legendary.

I thought of a few ways to approach this playlist and landed on making a playlist that I would've actually played on my last show. I limited it to 40 minutes of music which usually left 20 minutes to talk (to myself or to a guest). This playlist is meant to capture what I'm currently listening to while sprinkling in other songs that mean a lot to me. This playlist does not follow my usual freeform-show rules, nor does it abide by KVRX's long-time credo of "none of the hits, all of the time" because some of these songs have long been recognized as BANGERS. Strange times call for strange measures and it's my last playlist party and I'll break the rules (and cry) if I want to. Enjoy.

"Coolin' by Sound" (the song) by Pavement - It feels right to include my show's namesake into at least one episode. I chose it as my first song because it's as close as I'll ever come to having a theme song. Pavement forever.

"Six Feet Apart" by Luke Combs - Most of those close to me will know that I'm a sucker for cheesy country. A close friend sent this recently and, in true cheesy-country fashion, it captures what we're all feeling without leaving much to the imagination. What you see is what you get with these kinds of songs and I kind of love it.

"Human" by Molly Sarlé - The Tweedy's (Wilco's lead singer's family) have been hosting a nightly Instagram Live during shelter-in-place where they BS and play songs either as a family or Jeff, Sammy, or Spencer will play solo. I'm not sure how they came to performing this song, but once Sammy (vocals) and Jeff (guitar) started playing this, the talent of the family members and the songwriter began to shine. Having never heard it before, I was blown away at all involved. I highly recommend this listen and tuning into their Instagram live on most nights around 9 pm CT (@stuffinourhouse). FYI - When I got them to play Neil Young's "The Losing End", my quarantine bucketlist was complete (after making multiple loaves of sourdough of course).

"Keep the Change" by Mattiel - I wanted to include a song that I discovered through KVRX that I have fallen in love with. I think this song exemplifies the quality of music that gets submitted to the station and that DJ's have at their fingertips ALL THE TIME. Ask any DJ and they'll tell you the station is a blessing for inner music nerds and crate diggers alike (and also for those who love to make others listen to their playlists).

"4 American Dollars" by U.S. Girls - This song is at the top of those songs that have been pulling me through quarantine. It's a great song for a pick me up that may or may not lead to dancing or to, at least, aggressive head bobbing. Over their past few albums, U.S. Girls have been refining their sound and leaning into dance-able hits like this one. You too can do a lot with four American dollars!

"Blue Eyes Crying in the Rain" by Willie Nelson - I just finished Ken Burns' country music doc and I have a breaking news for everyone reading - Willie Nelson is a pretty good songwriter. I always knew "Whiskey River" and "On the Road Again" went pretty hard, but it wasn't until I listened deeply to "Blue Eyes Crying in the Rain" that I was gobsmacked by Willie's songwriting and guitar playing compositions. Much has been said about Willie's excellence that I don't need to go into great detail here, but I am now a disciple and am of the belief that we need to do our best to shelter-in-place to protect national treasures like Willie Nelson.

"Feel You Around Me" by NRBQ - NRBQ is a band that has always flown under the radar (since, like, the 1970's), but just enough above (?) the radar to where they can't be played on KVRX. I felt that this was my opportunity to showcase my love for this not-so-forgotten bar band and offer I song that I feel best represents their simplicity and brilliance. It was a close one between this song or "Magnet," but I'm getting married in October and I have to dedicate this one to my future bride and frequent co-host, Carley. Love you.

"You Look Good in Neon" by Mike and the Moonpies - My early memories of Mike and the Moonpies start about ten years ago from their residency at Hole in the Wall. They're a band that keeps the candle burning on the Austin-country sound of days gone by. I heard this song at our local beer joint, The Varsity, about a year ago and fell in love. Listening to this takes me back to The Varsity and keeps the memory alive of many Thursday's spent enjoying fat boy beers with friends. The Varsity closed its doors recently and will be missed by those who sat outside no matter what (okay maybe there were a few exceptions) and watched broken TV's that showed sports, but played country radio and provided the opportunity to listen to "You Look Good in Neon".

"El Sonidito" by Hechizeros Band - This one is an absolute ripper that is guaranteed to get the party going, even when you think the last note has been played. Highly recommend for quinceaneras, birthday parties, tailgates, shelter-in-places, weddings, a well-balanced breakfast, and everything in between. Lots of great times losing my mind to this one.

"Texas Me" by Doug Sahm - To round out my playlist, I wanted to include an artist that might be fairly overlooked nowadays. Even though he has a hill (??) (awesome, wow) named after him at Auditorium Shores in Austin, it still falls short of conveying the influence he had on the Austin music scene and on my life - they're going to need a bigger hill to convey that. A beloved member of the Texas Tornadoes, who I have fond memories of listening to in my grandfather's truck as a child, Sahm was a gem that was gone too soon. "Texas Me" is a song I love that shows Doug's love and mine of our great state (and university, in my opinion). Though I'm staying in the state (TX 4 lyfe), I will miss this great university.

"Don't Let Me Die in Waco" by Croy and the Boys - Carley and my next chapter will take us to Waco for a year, and I'm counting on you all to make sure we make it back. The song says it all.

Finally, I never got to thank all of my loyal listeners. It means so much to me that you spent an hour of your Sunday listening to my music and my conversation. You made me feel special. I love you all and can't thank you enough.

And thanks to KVRX - you provided an outlet and a lively group of friends (sorry law students) that I otherwise wouldn't have had during my time back at UT.