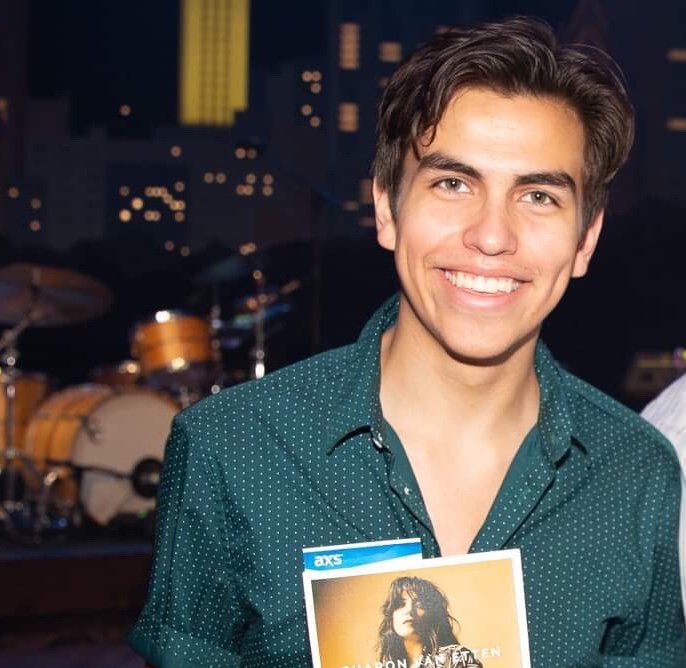 It all started with my discovery of the song ‘Denise Don’t Want to See You Cry’ by Night Moves on SoundCloud during the spring of my senior year of high school. That song was basically on repeat for the rest of 2016, and I got really, REALLY into Night Moves as a result. One day, while looking them up on YouTube, I came across a clip of them doing a KVRX Library Session. I had already decided to attend UT by this point, but had no idea that they had a radio station! The idea of being a radio DJ sounded amazing to me - so much so that I walked into the station and signed up for DJ training on my very first day at UT that August. I Four years of DJing; two years as a Programming Director; and (probably) millions of song listens later, and I have to say I am forever indebted to Night Moves for leading me to KVRX - even if I never got to see them live, which is why I joined in the first place. LOL.

That would have to be the marathon 7-hour show DJ Tuna and I did during Winterim 2016-17 – the first of many all-nighters I’d pull at the station over the years. We went in at 10pm, I believe, and went all the way until 5am! We played what may have been the widest range of genres ever seen on a single KVRX episode - from light and soft classical folk, all the way to the heaviest shoegaze you could possibly imagine. All the while, we were taking calls from just about anyone who would listen; I got to talk to some of Tuna’s friends from her hometown, and my own mom got all of her fellow night-shift hospital nurses to tune in – establishing the foundational base of six loyal listeners for the 5am show Tuna and I would end up doing that semester. That night was also special because I met a number of other KVRX DJs who would end up becoming, as well as introducing me to, some of my now-closest friends. The origin story of almost all my best friendships in college can be traced back, directly or indirectly, to that one night in early January 2017. What a time.

Aside from leading me into countless amazing music discoveries and giving me the tools to make many more, I’d say my biggest takeaway from my time at KVRX is that there is no such thing as “bad taste” in music. We listen to what we listen to because it speaks to us, in one way or another; that is the beauty of music. If you connect with a song, artist, or genre, it shouldn’t matter what the critics or other people say about them – that connection is yours to have and cherish, and only you hold the rights to comment on or alter that relationship.

These are a mix of my favourite songs as well as songs dedicated to someone.

Sprawl II (Mountains Beyond Mountains) – Arcade Fire: This was my favourite song for a number of years, and was definitely the anthem of my freshman year. It describes exactly how I felt in the time before I came to UT and really “discovered myself” or whatever, a feeling that KVRX played a central role in resolving – by giving me (and so many others) a place to feel at home, regardless of who we are or where we come from.

Age of Consent – New Order: I have so many incredible and wonderful memories from the last four years to which this song serves as a soundtrack. From dancing wildly with friends at parties or in our apartment living rooms, to screaming along at full-blast in my car on I-35; the feeling of excitement I get when I hear Bernard Sumner’s opening guitar licks on this track is indescribable.

Motion Sickness – Phoebe Bridgers: According to my Last.fm listening statistics, I listened to this song more than any other during my four years at UT. I’m pretty sure 50% of those listens came in the first few weeks after I discovered the song. I still love it as much as I did then, though, and Phoebe has also become one of my favourite artists. That sentiment is shared by my little sister, who this spin is dedicated to.

Miki Dora – Amen Dunes: Anyone who knows me, at KVRX or otherwise, knows I couldn’t have left out the song that became the anthem of my junior year. I could gush on and on about how I think it’s one of the greatest songs ever written, but seeing as my space is limited I’ll just say this: look into the meaning of the lyrics, then listen to it while imagining yourself sitting on the beach and letting the waves wash up against you. Or, go do that if you’re able to. I don’t know where you are.

Nobody Else Will Be There – The National: A top-5 memory in college for me happened when I was just a few weeks into a semester abroad in Edinburgh, Scotland. After listening to The National’s new album, Sleep Well Beast, I decided it was so good that I just had to see them live. As it happens, they were playing in Edinburgh THAT NIGHT; though the show was sold out, a call I placed to the venue revealed they actually had exactly ONE ticket left. Following a wild cross-town sprint, I got to witness a show that led, eventually, to The National becoming my favourite band – and to many incredible memories in turn.

Spill of Sugar – Cookies & Dakota – Stereophonics: Songs for the ones that got away.

Burning – The War on Drugs: This song was the one coming through my headphones as I stepped off the bus and walked up to the UT campus on my first-ever day of college. It was also, fittingly, the first song I listened to after finishing my final college assignment. Its meaning is extremely reflective of my journey over the last four years, making this song the perfect bridge between the beginning and end of my time at UT. It also slaps.

Take Me Home – Phil Collins: The story these lyrics tell, of the man who has travelled the world endlessly and is finally ready to come home for good, are in perfect parallel with that of the man who first played me this song when I was three years old, birthing my love of music – my dad. This one is for him.

Dancing in the Dark – Bruce Springsteen: A song that certainly describes how my generation is feeling while graduating in times like these. The anthem of my senior year, and also one my favourite songs of all time. Born in the USA is the greatest album ever made. You can’t change my mind.

Poor Places – Wilco: Everyone goes through hard and dark times; this song, and the album it is on, got me through some of my darkest. They also served as the soundtrack to many, MANY long drives through the countryside. Long live Jeff Tweedy, our lord and saviour.

Perfect Places – Lorde: There may be no such thing as a ‘perfect place,’ but Austin sure was good to me for the last four years. This song was the anthem of my sophomore year, and has become my #1 favourite song of all time. There is no other song I could pick as the last one I ever play on KVRX than the greatest one ever written, in my humble opinion.