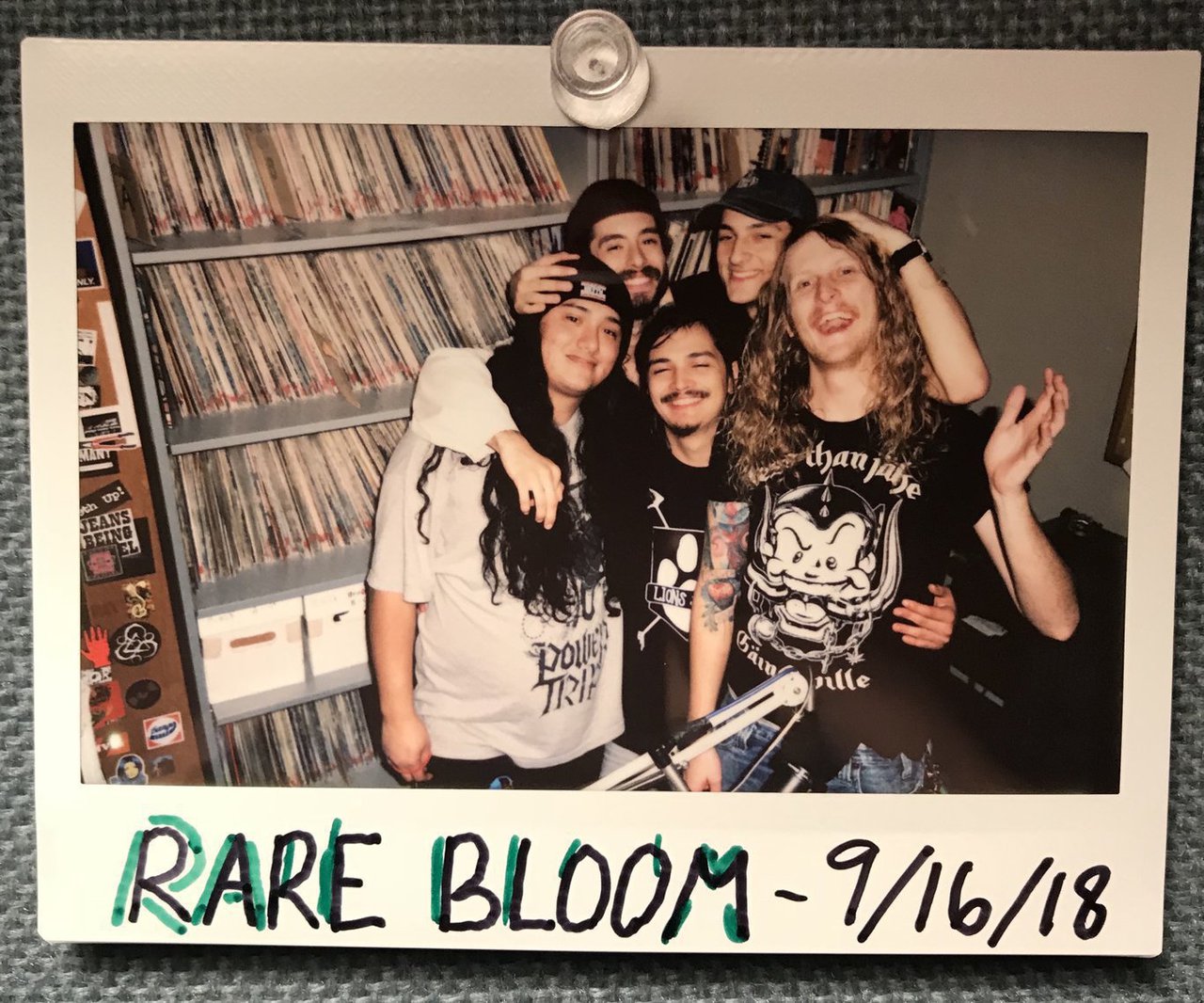 For those of us worried pop punk was not properly defended, rest easy. Austin's five-piece pop-punk group Rare Bloom is still giving us all the split kicks and heartfelt vocals our emo little hearts could desire. Releasing their debut EP What Ya Want in 2016, they have since gone on their first tour and released a single, "Brain Freeze." The group is composed of guitarist Taylor Dyer, bassist Marcus Catt, drummer Michael Torres, and vocalist/guitar player Ethan Thayer.

We sat down with the band before their Local Live set to talk tour life, working with Frenchie Smith, and what's up with the Austin music scene.

Listen to the interview here:

KVRX: How are you doing today?

Ethan: Good man, how are you?

Fantastic. You guys just came back from practicing right?

Ethan : Yeah, just came back, getting ready for the show. Or the four song gig we are about to play inside Local Live.

Mikey: Yeah it's a radio show, this is as classic as you can get!

Mikey: I think the oldest friendship is myself and Jake. We actually met in second grade. My parents bought me a drum set when I was really young and Jake always played guitar. It wasn’t until middle school until we figured out what we were doing. And then I met Marcus through Jake and then I met Ethan through Marcus.

Marcus: I kind of met Jake because I didn't know he used to live right down the street from me. One day I was like, "I need a ride from Fun Fun Fun Fest." He was like, "I live right around the corner." And I was like, "well let's hang out more," and that's how I met Jake.

Mikey: Actually I think the first time I hung out with Marcus I had an extra ticket to see Cannibal Corpse and I knew he liked metal so I was like, "hey wanna go to the show?" 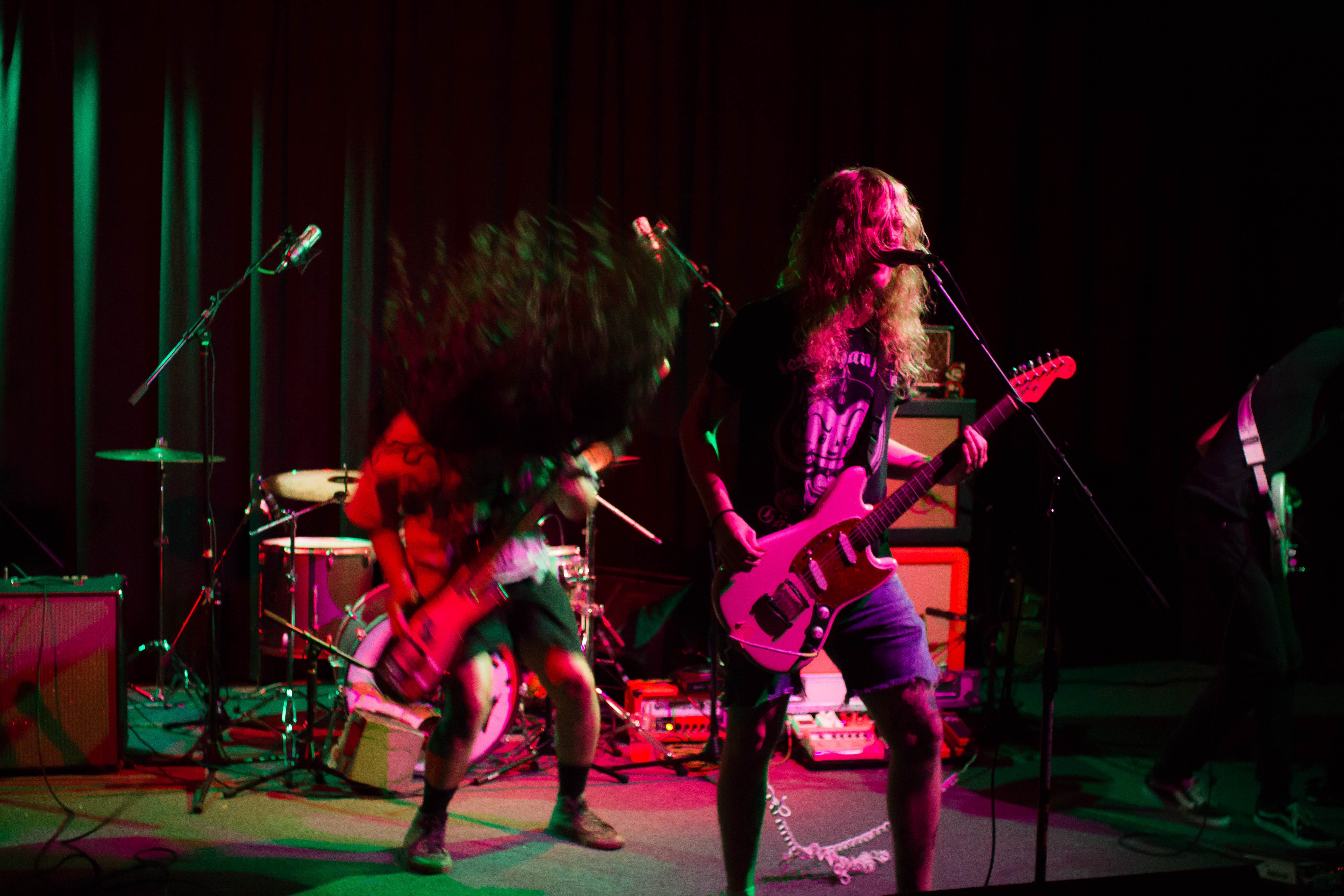 So you guys are all friends, and from what I know is Ethan doing most of the writing?

Ethan: I would say I did. I definitely did. It’s definitely taken a turn for the best now because I got 2 different guitar players like Jake and Taylor. They play in a band called Southpaw Sonata and they kill it. They’re amazing, they’re really good at what they do. I love em.

So they’re writing as well now?

Oh for sure. I’d say it’s a lot more technical than y’know the three chord progression it had. It's definitely still gonna be tried and true pop-punk/skate-punk kind of vibe. But it's got a lot more umph and kick to it.

Is “it’s” a future project that's going on right now?

Future stuff we're working on right now, yeah. We were just in studio with Frenchie Smith. We did our new single “Brain Freeze” and it was great. It was a recording studio called The Bubble and he’s done artists like Jet, The Front Bottoms, The Darkness, And You Will Know Us By The Trail of The Dead, Vanishing Life. He completely destroyed us. 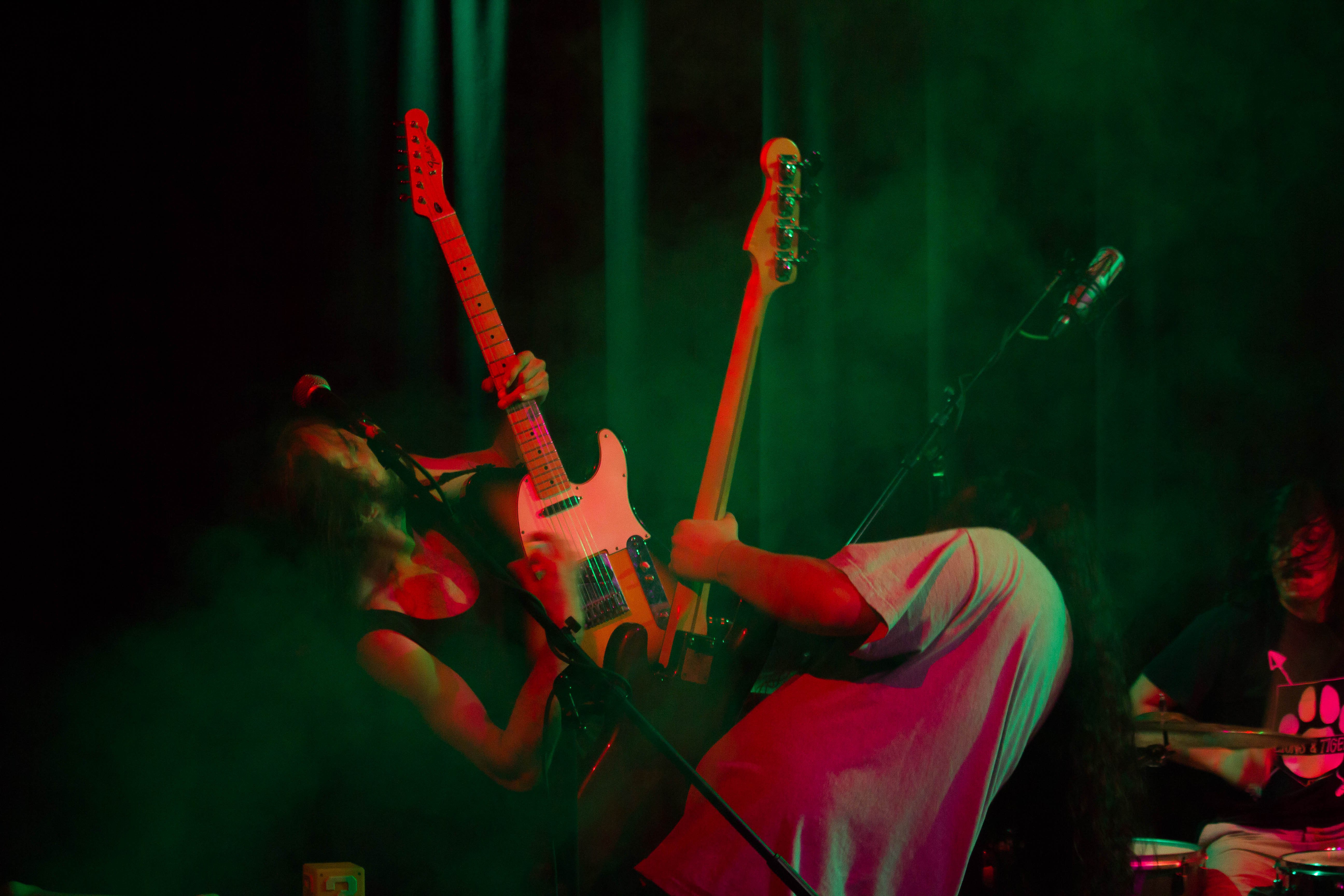 What was it like working at that kind of level?

Oh great! It was so fun. It feels so much more comfortable than doing something like going to a bud’s house and singing in a closet.

Mikey: It was very professional

Ethan: It’s like a safe space almost. His mind is so great. It was Frenchie and another guy called Jas Nowicki who was the mixing engineer of What You Want, our first EP back in 2016. And yeah man, they put their minds together. Frenchie came to me and so did Jan and said they wanna put it out, wanna work with us. And we moved forward with it.

More about “Brain Freeze.” From what you’ve said before about the song it’s more or less about toxic lifestyles and how harmful they can be. What prompts you to write about these things?

Ethan: Definitely what prompts me to write about these things is the city of Austin. I used to work at The Mohawk for about 4 years. I don’t work there any longer. Austin and Red River, the whole culture itself has such a loving family I’ll never find myself anywhere else. I love that place.

However, it can be too fun. You can definitely take advantage of said rock n roll, like drinking too much maybe going to Sidebar once every too often. You can't take advantage of what Austin has for itself being the live music capital of the world. But yeah we do our best. We like to smoke weed we like to drink, don’t get us wrong, but everything in moderation. Believe in yourself. That’s actually what rare bloom stands for: it’s like the rarest flower, y’know the rarest of the nugs. 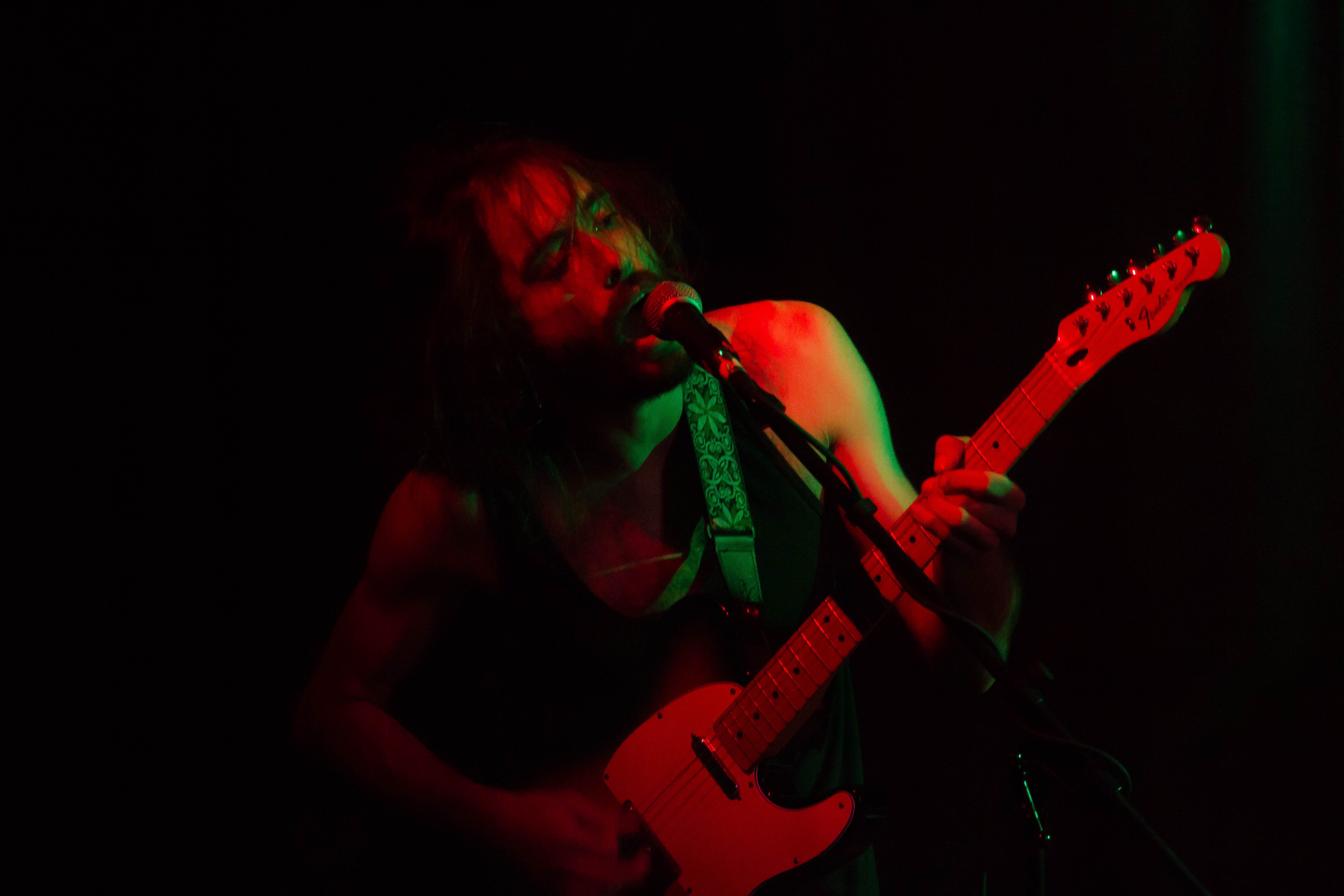 You were talking earlier how some of you have other projects like Southpaw Sonata. What else are you involved in?

Ethan: I only do Rare Bloom.

Mikey: It’s funny ‘cause everyone in the room’s only in Rare Bloom. I used to be in a metal band but I left. Jake and I used to be in a band called Charmer. We were doing that for years and the guys from Southpaw Sonata were in that too. But it just naturally fell back and we wanted to focus on this. They were very, very busy and working very hard with Southpaw Sonata so that’s gonna be moving fast.

Ethan: Taylor does lighting. He works for several clubs and venues, and frats. Your local frat daddy!

How do you guys find time to practice?

It’s quite difficult. We all work full-time jobs. We try to find time once or twice a week. Realistically, it’s once.

Mikey: Myself, I work 50 hours a week so it’s difficult to squeeze it in. So it’s a trade off but it’s definitely worth the investment.

Ethan: That was our first tour. It was fun. The first tour you’re gonna have some pull. Nobody knows who we are in Oklahoma, respectfully. So when we go there and there’s the 40-50 people who show up it’s kinda like a positive virus. Those 40-50 people are like, alright I’ll tell 1 bud and that bud will tell another bud, right? They buy a shirt, “oh what’s a rare bloom?”

It’s just full circle that’s how it’s kinda always worked in music and going to a show. I’m sure you remember going to a show and seeing the merch world set-up. Seeing your favorite band, trying to get to the front. 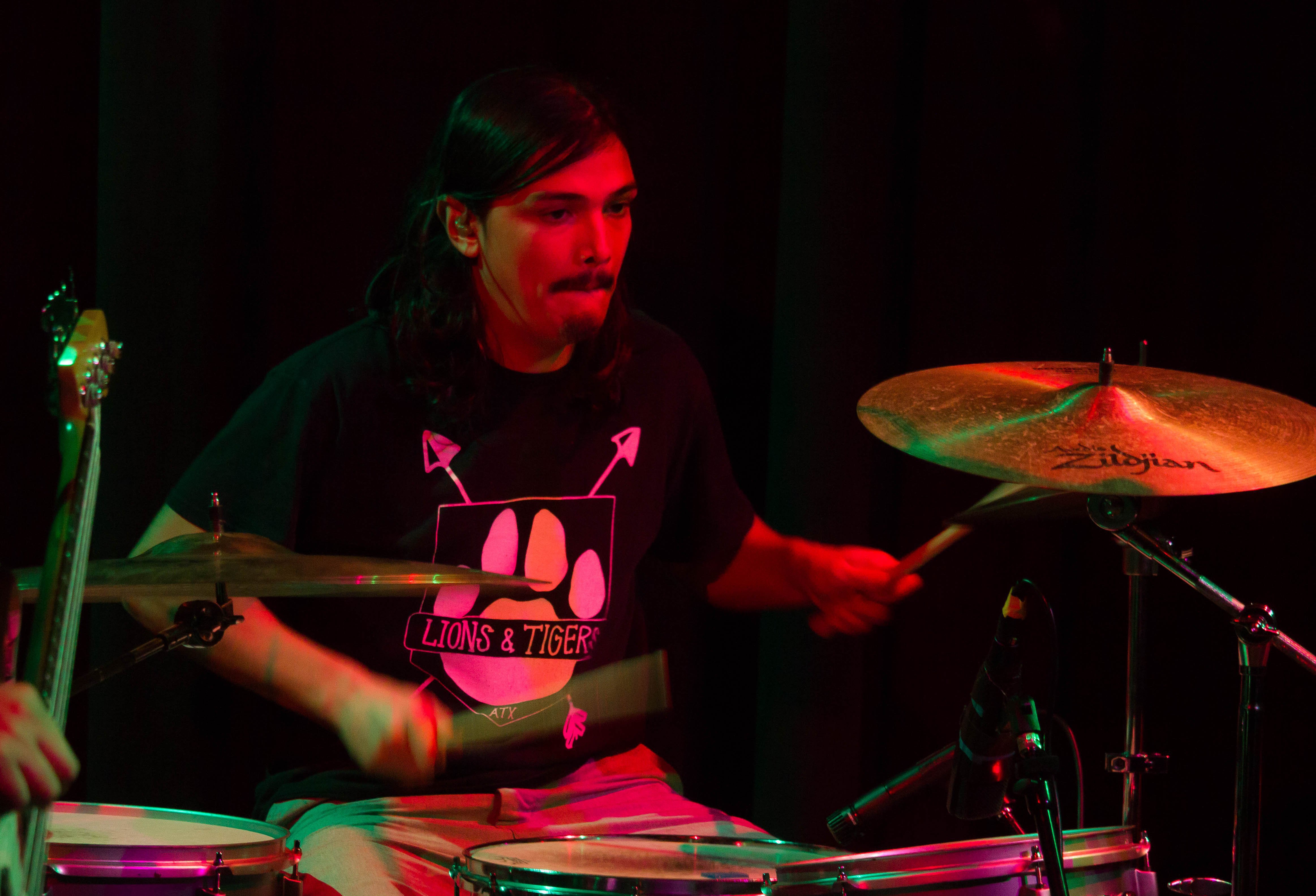 Do you plan on touring again in the near future?

Yeah, for sure. We’re working on more content right now, were hitting the studio in october and then were planning on tour in the wintertime. I’m gonna be leaving in January on a tour that hasn’t been announced yet with folks I can't even say but… yeah.

We’ll be on the lookout. When were can we find that news when it breaks?

Probably December. On Instagram, or all social media markets.

More about the tour. What are the craziest, wildest stories? I heard something about a van blowing up or flipping over?

Mikey: Well that wasn’t really on tour. Ethan was working for Blink-182…

Ethan: Yeah it was nuts. I was working for one of my favorite bands ever. I had my buddy Tyson come out it was a great show - it was a dream. It’s just being stage left watching your favorite band.

We’re leaving Amarillo, its 5:30 in the morning and we had a tire blow out. I was asleep in the back and Tyson was driving. We went off of a country road highway and flew 40 feet and flipped four times. And it was insane. It was like Fast and Furious. 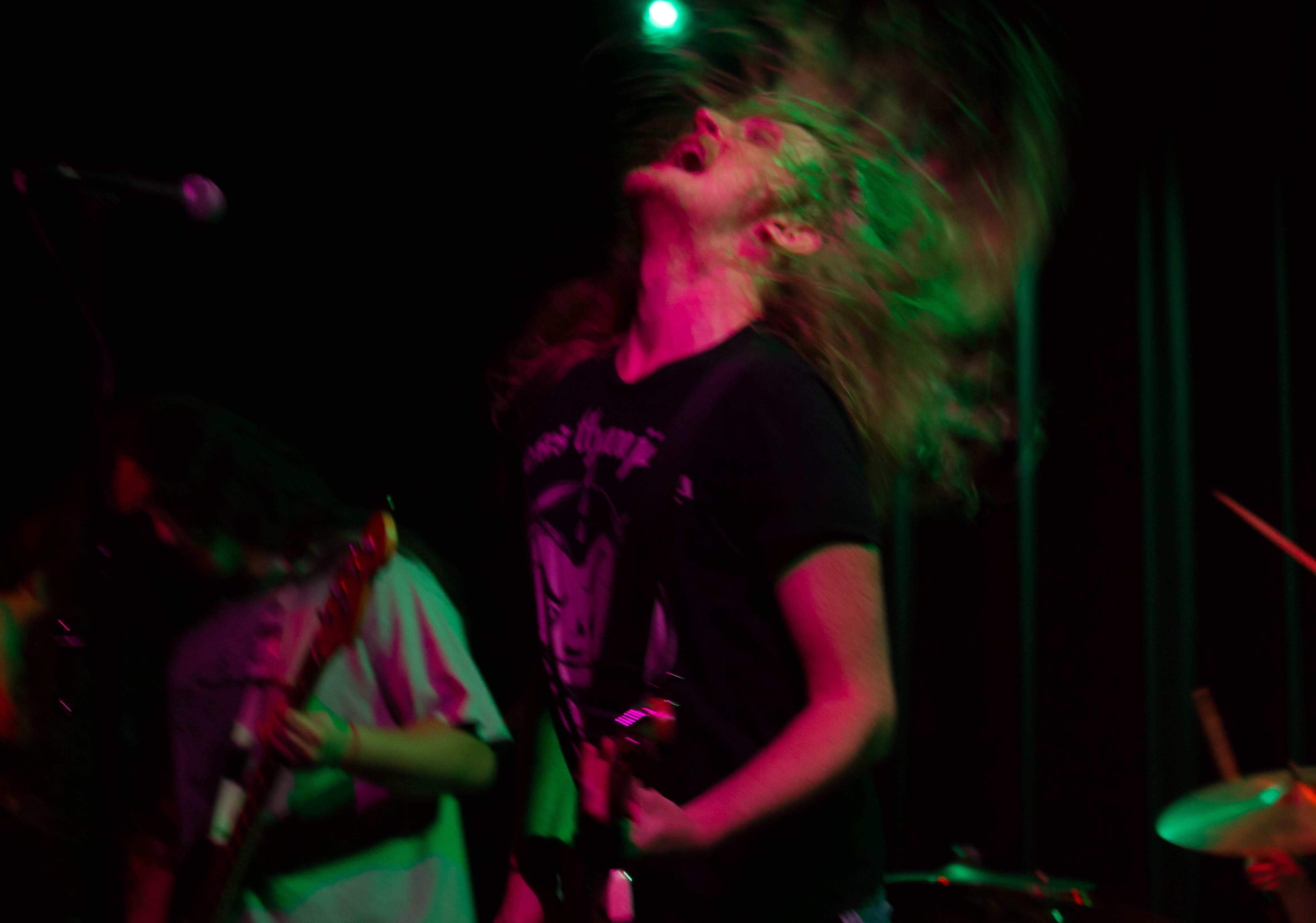 The hair! Photos by Erin Eubanks.

Mikey: That that same night, he played a show and he was jumping off of my drumset. He had some cracked ribs or something and he still had energy. I was playing and I was thinking, what are you doing?! It was unreal.

Ethan: I found out I had 3 cracked ribs and this wicked scar on my face that obviously, the radio can totally see. [The interview aired after Local Live.]

Marcus: There’s a picture of the van that became the “Brain Freeze” single art. 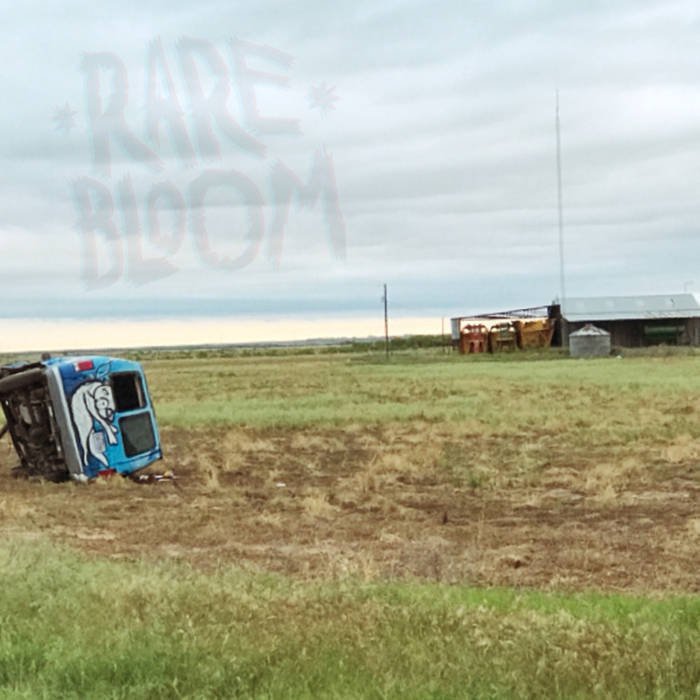 Well thanks for sharing that story, man. Is there anything else you guys want to share about plans in the future?

Ethan: Totally yes, we’re about to put out a music video. We’re working with a PR team here in town. They are wonderful. They’re called Catalyst and our buddy Blake is helping us out a lot.

It’s not every day you get to do this and I just feel so stoked and appreciative.

What song is it for?

Do you have a date for that by chance?

End of the month... it’s still something we have to say. 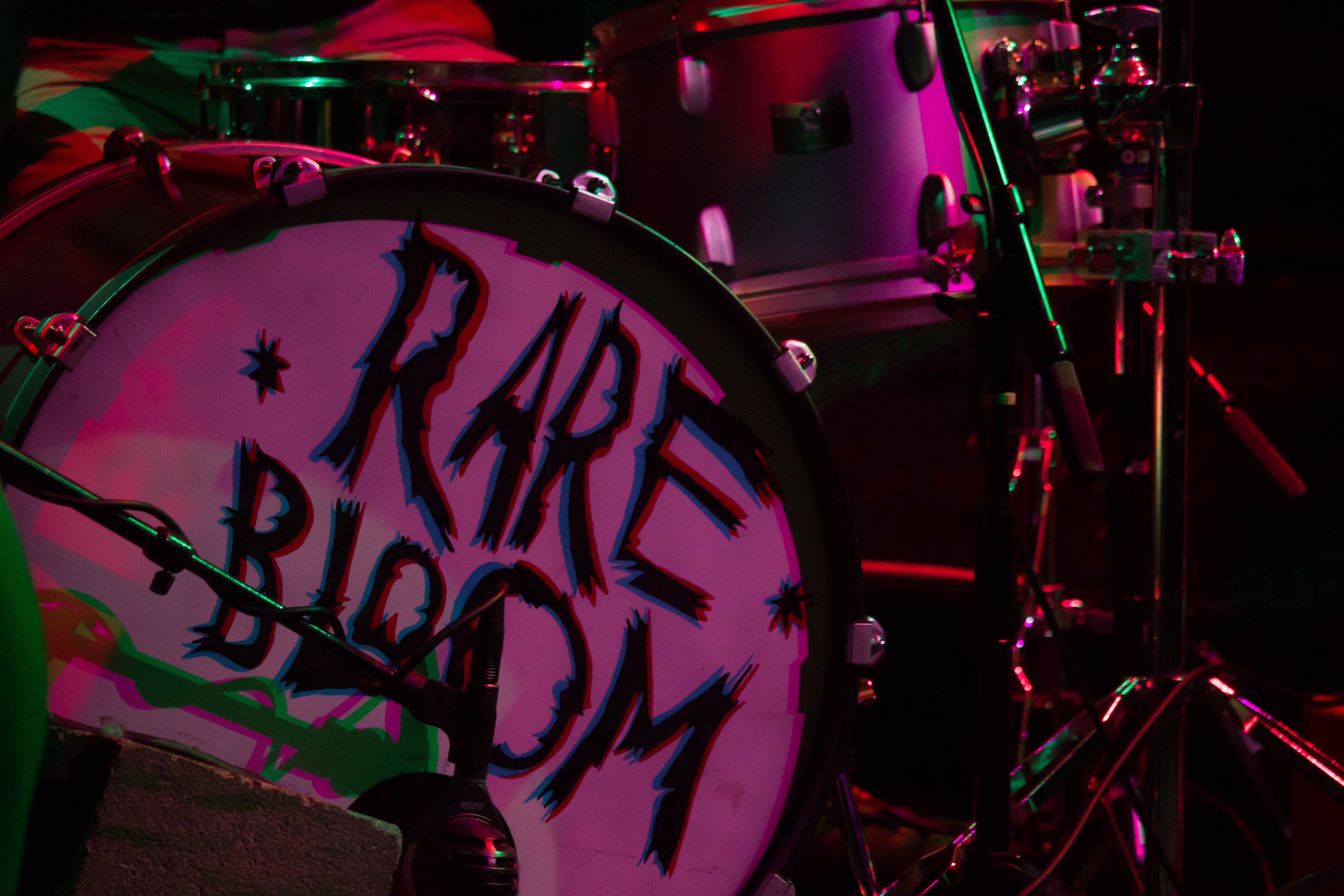 Local Live is every Sunday at 10pm on KVRX and TSTV. We’re also on Facebook and Instagram.