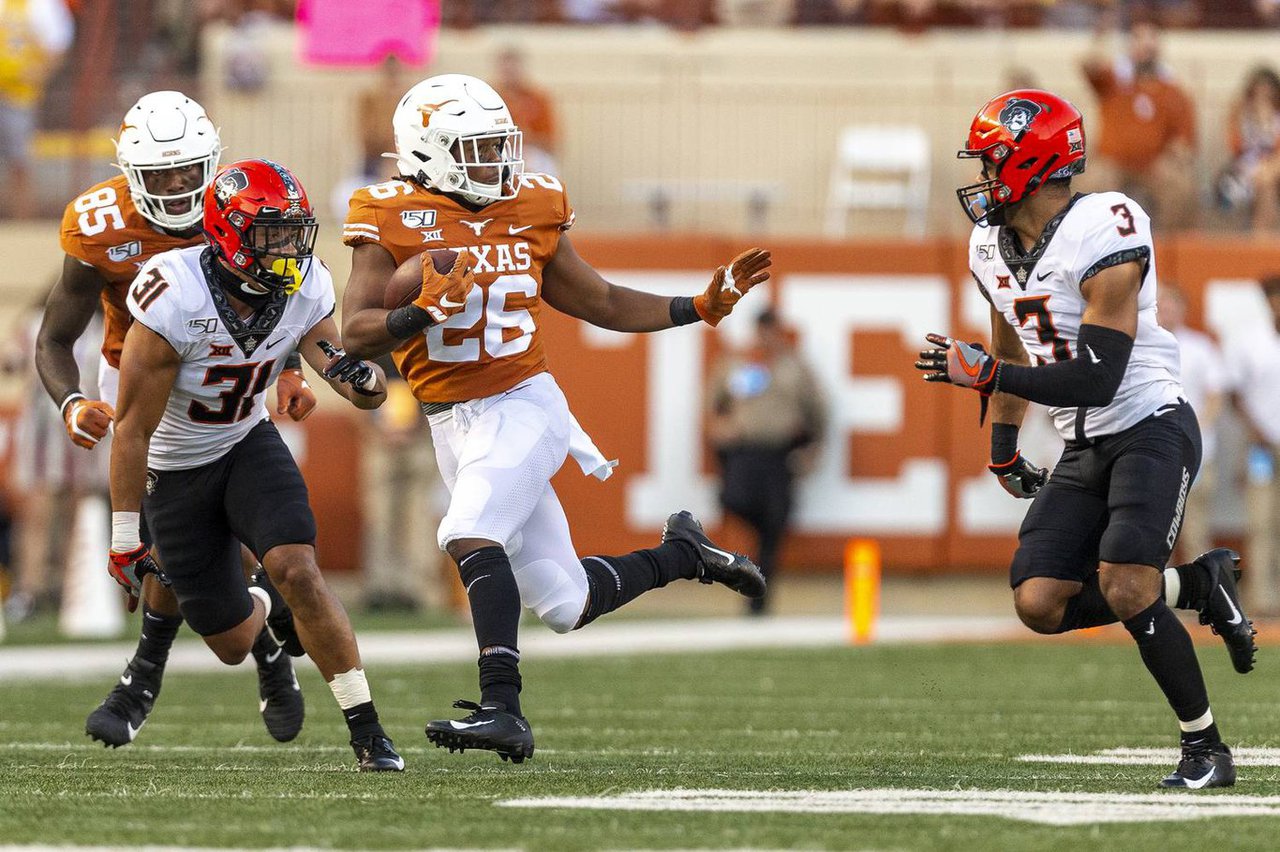 It was a little bit of a slow start for the Horns against Oklahoma State, but ultimately, they were able to head into the bye week on a high note.

Oklahoma State played well against us and made it very close with a final touchdown drive with less than 2 minutes remaining on the clock. One of the top running backs in the country, Chuba Hubbard, was held to just 121 yards off of 37 carries.

Yes, you read that right, 37 carries.

While we gave up some big runs to him, our defense really held their own against him all night. Additionally, Tylan Wallace, their star wide receiver, was held to 83 yards on 5 receptions. It was pretty evident that our game plan was to shut down Hubbard and Wallace, and to be honest I thought we did a relatively good job off that throughout the night.

Unfortunately, by focusing so much on those two, Oklahoma State quarterback Spencer Sanders put on a show when he scrambled throughout the night. Sanders ran 18 times for 108 yards and kept the Cowboys in the game. While it was not enough this year, Texas should be very aware for next year that this kid can play and is only going to get better.

Offensively, the Longhorns now have 3 scoring plays of over 50 yards this season. To put that in perspective, we had none last year. Quarterback Sam Ehlinger looked locked in all night and finished with 280 yards, 4 touchdowns, and 1 interception.

However, it is important to remember that we interception was off of a tipped ball on a slant route in the middle of the field that the receiver may not have put as much effort to fight for as he could have. Any ball that is tipped up by a corner in the secondary is probably going to get picked.

Regardless, Sam once again ran the offense efficiently and got the job done. Duvernay once again had an excellent night and continued to show his physicality on and off the ball all night. I have been raving about Roschon Johnson for the last few weeks, so I guess fellow running back Keaontay Ingram took note and played lights out this weekend. Ingram looked like the player we were all so excited for coming into the season, finishing with 21 carries for 114 yards. He looked patient and dynamic all night, which is a great sign heading into West Virginia and Oklahoma.

The bye week came at a great time for the Longhorns, as they faced countless injuries, specifically on the defensive side. Linebacker Marcus Tillman went down with an apparent leg injury on the opening kickoff, cornerback Jalen Green hurt his shoulder and could potentially be shut down for the rest of the year depending on the severity, cornerback Josh Thompson suffered a fracture in his foot, and Caden Sterns left the game on a cart with a knee injury. Coach Tom Herman thinks safeties BJ Foster and DeMarvion Overshown could return this week at West Virginia, which would add some much need experience to our secondary.

With all the injuries, we were able to see some of the younger depth in our roster, which should be reassuring for our potential in future seasons. Safety Montrell Estell got his first meaningful playing time, as did freshman nickel back Chris Adimora. On the offensive side of the ball, the bye week should help Collin Johnson return to full health, as well as players like Zach Shackelford that are still not up to 100%.

While the Longhorns got the win on the field Saturday night, athletic director Chris Del Conte still received a lot of heat from students for how the student section is being handled. First, let me start off by praising Mr. Del Conte for all the great things he has done since being here.

Bevo Boulevard seems to be a big hit and the ‘Don’t Stop Believin’ light show is well on its way to becoming a fun tradition. He has been very open to criticism and worked hard to listen to everyone’s concerns or questions. However, due to the construction of the new South endzone, another great improvement for Texas athletics, the student section has become a total nightmare.

From a student’s perspective, it seems that the university sold the same amount of Big Tickets to students as they have previously, despite losing an entire section of bleachers. I am not saying that is what happened, but I can tell you from being at the Louisiana Tech and LSU game that it certainly felt like that. This week, every student was sent an email telling them to go through one gate with the gates opening at 4:30.

I arrived at the gate around 5:45 only to be greeted with a massive line and people turning back because they had been waiting for hours. I waited until 6:20 and realized I was not getting into the stadium any time soon, so I returned home to watch the game. At kickoff, the aerial view of the stadium showed huge gaps in the student section where, as I found out later, my friends were packed in line waiting to be let in. The gaps within in the seats remained empty throughout the game

. On the southeast edge, one section remained completely empty the entire game. As I watched the game, I started receiving notifications from Del Conte’s twitter account as he responded to praises and complaints from students. To those who were able to get in and took to twitter to praise him, Del Conte was very appreciative and informed them that the system isn’t perfect, but still getting tweaked.

To those who were complaining, Del Conte was being very short in his responses and borderline disrespectful. If I were him and I was trying to deal with this mess every week, I would probably be pretty rude to those who were complaining on social media about me, however, I am not him. I am a student, not the athletic director of the University of Texas at Austin. For example, one student, who’s tweet has since been deleted, basically told him the system was bullshit, to which Del Conte responded:
“The reason for the policy change was created because unruly behavior at the      LSU game where a bum rush of students at the gate created an unsafe environment for       those [who] were attending the game in orderly fashion…”

Obviously, the Big Ticket does not bring in as much money as other seats, so I understand why he wants to cram all the students in one gate and have them sit on top of each other. But don’t act like you care so much about the students gameday experience publicly to save face and then continue to treat them like second class citizens through your actions and on social media.

Not only does it look terrible for the university that the student section is empty for an ABC primetime game, but it also looks pretty childish on your part to essentially tell a student “No, you’re wrong. Next”. Mr. Del Conte, I am a huge fan of what you have done for this school already, and what you have done previously at TCU, but I think it is time for you to apologize to the students and switch to a different system such as a  lottery system.