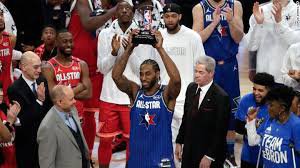 Over the years, many fans have complained about the lack of competitiveness in the all star game. Very little have the players cared about defense, strategy, or the winner of the game. The new rules implemented last night changed all of that. These rules were added by commissioner Adam Silver based on the request of the president of the players union, Chris Paul. They included a $100k award to the charity of choice of the team caption per quarter won, a $300k award to the captains of the winning teams charity, and eliminating a time limit in the 4th quarter. Instead there would be a "target score" that would mark victory for whichever team got it first. The way they determined this was by adding 24 points, to honor Kobe Bryant, to the winning teams score after 3 quarters. So, in this game, Team Giannis was winning 133-124 after the third quarter, so whichever team got to 157 first won. This ended up being a win for Team LeBron, as his team came back and won 157-155. With this result and all of the change that took place, what were the main takeaways from this years all star game?

1) The NBA is open to change

Adam Silver has been labeled a players commissioner. He seems to really take the players opinions into account and sides with them most of the time. This is a breath of fresh air from old commissioner David Stern, who was viewed as more of an owners commissioner. He mainly focused on what the owners wanted and would come down harshly on players at times. Not to say one is better than the other, after all, both players and owners play a gigantic role in making the NBA work. The interesting thing, though, is it seems that the players advocate for a lot of changes in the league and Adam Silver often abides by the requests if he believes their ideas can help the NBA. That was the case for this all star game. Chris Paul's idea of changing the 4th quarter made a big difference in the competitive aspect of the game. There now has to be a game winning shot for the game to end, making every basket in the 4th quarter more intensified. Players seemed to be giving there all out there by arguing with the refs, strategizing on how to finish the game, and playing tough defense. The fans were loving it as well, which was easy to see by the reactions of the crowd during the game and on Twitter. This was an overall very effective change and brought us a competitive all star game in which we have not seen in years. This goes to show this more proactive NBA, modeled by Adam Silver, can really make the league better. I am not sure if the prior commissioner would have taken a risk like this off the suggestion of a player. This new era has the potential to be the best era as the league is willing to experiment to make it as good as it can be.

2) Kawhi Leonard is taking the league by storm

Winning the Kobe Bryant All Star Game MVP award is just another accomplishment off Kawhi's bucket list. After winning the finals and finals MVP last year, Kawhi has been making this case for himself as the best player in the league. This summer, he decided to leave the Toronto Raptors and join the Los Angeles Clippers. This surprised a lot of people, as many thought it was a foregone conclusion he was going to join LeBron James and the Los Angeles Lakers. This was a big statement by Kawhi. LeBron has been viewed as the best player in the NBA for quit some time now. Joining him and Anthony Davis was a surefire way to win a championship but Kawhi did not go for that. He decided he wanted to beat LeBron and prove he is the best player in the world. More evidence was shown of this when, during the first game of the year, New Balance released a commercial appointing Kawhi as the "King of LA". In the two head to head match ups, Kawhi has outplayed LeBron and the Clippers have won both times. Fast forward to the all star game, Kawhi found himself on Team LeBron. By winning the MVP, in an actually competitive game I might add, Kawhi added another check mark to building his resume as the best player on the planet. Myself and many others believe he already has that title, but Kawhi is still hungry to prove it this year come postseason time. The all star game proved that LeBron needs to watch out or the whole world will acknowledge that the crown has been yanked off his head.