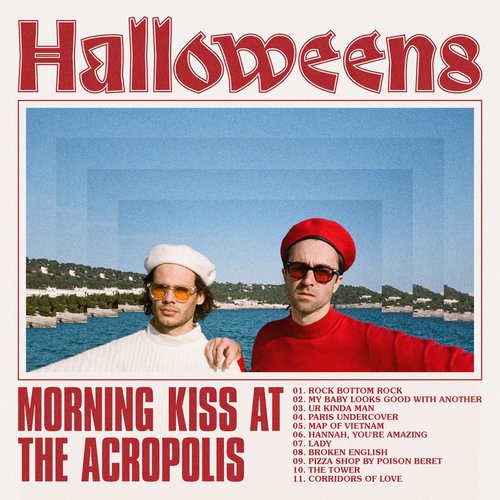 Halloweens are a UK duo composed of Justin Hayward-Young and Timothy Lanham. Young has spent the last decade leading his band The Vaccines to UK indie stardom. Known for his cheeky lyricism, Young has even co-written songs for acts such as One Direction. In 2015, he recruited Lanham to join The Vaccines as a keyboard player, and four years later, the pair formed Halloweens as a side project. While side projects can be a bit of a hit or a miss, there is no doubt that the pair’s debut is a hit.

Recorded and produced by Luke Temple (Here We Go Magic) at his Oakland studio in 2019, Morning Kiss at the Acropolis is a blast from start to finish. The album finds Young and Lanham indulging in their singer-songwriter musical influences (Randy Newman, Harry Nilsson, John Cale, etc.) and delivering 11 fun, schmaltzy pop songs.

Opener “Rock Bottom Rock” features catchy John Cale-esque piano that struts beneath cheeky lyrics: “Go running for an hour, and then I take a shower / I moisturize before I face my demons.”

“My Baby Looks Good with Another” follows and is easily the biggest banger on the album, if not all of 2020. The track features a ridiculously catchy chorus, as well as swirling keyboards, harmonies, and a sick bass solo at the tail end of the track.

“Hannah, You’re Amazing” is another upbeat, bound-to-get-stuck-in-your-head ditty. The pair made a video for the track and it’s pretty rock and roll, too.

The beautiful, piano-led ballad “Ur Kinda Man” could be mistaken for a Randy Newman man (in a good way).

Solemn, melancholic lyrics of lost love and yearning seem to be the common theme on Morning Kiss, and particularly stand out on highlights “Map of Vietnam” and “Broken English.” While Young is clearly not afraid to write songs filled with lyrics of heartbreak and sadness, he never fails to deliver cheeky lines. Special shoutout to “Pizza Shop by Poison Beret” for featuring quite possibly the best lyric of 2020: “We DJed at the pizza shop / And just about survived the drop / But no one ordered rock and roll / With pineapple on top.”

Morning Kiss at the Acropolis is one of the best, most fun debuts of 2020. While the album features Halloweens wearing their influences clearly on their sleeves, there is doubt the duo is doing it with pride… and maybe a cheeky grin.

Recommended: Hannah, You're Amazing, Rock Bottom Rock, My Baby Looks Good with Another, Ur Kinda Man