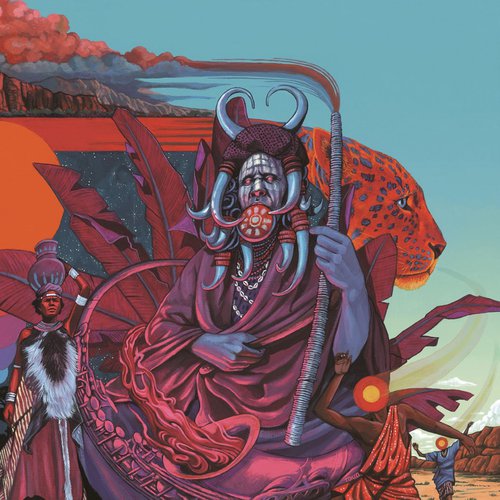 Idris Ackamoor and the Pyramids, originally an obscuro spiritual/afro-jazz group from the 70s continue their 2010s comeback with a new funky vision. Continuing the tradition of Pharoah Sanders and Bitches Brew era Miles Davis, Idris and the Pyramids are able to somewhat resurrect their old sound to distinguish themselves from the all-too-numerous funky Sun Ra ripoffs and white guy “spiritual” sax-funk bands. Ackamoor comes down from the flaming pyramid of spirit with red-hot and extraplanetary jams that often push at the boundaries of jazz, but don’t seem to quite budge over them.

It must be admitted that “Theme for Cecil” lacks the same sound of Cecil Taylor, Ackamoor’s sax still shines in the freeform inspiration from Cecil present on the earliest Pyramids records. A track by track examination would probably be redundant, as almost all tracks are essentially psych-jazz journeys through improvisation. “Tango of Love” may have too much flat jazz-fusion guitar chords for my taste at the start, but the violinist shines and the flute justifies its use to create a genuinely organic improv. “When Will I See You Again?” seems to break the seeming-improv pattern, being mostly repeated vocals and steady, non-descript playing. Being an hour and 15 minutes, one should probably absorb the album in pieces, as some of the songs running over 7-10 minutes take at least a few of those minutes to get interesting and reach their most entertaining moments.

The vocals are scattered throughout the album, but are by far the most compelling on the opening track. I would also advise any listeners intrigued by “Dogon Mysteries” to explore Nathaniel Mackey’s jazz-based poetry that meditates on the ancient Dogon system of mythology. Ackamoor’s interactions with ritual, myth, and interrelations of nature, humanity, and spirit from the first track set something of a roadmap for the themes of the release, but closer to the end of the aural journey we forget what the fire from the start looked like and kind of wonder why we’re still on this trip. Regardless, it’s still got some good energy pulsing from the nondual, sax-skronk-violin-string-percussive center of some chanting galaxy.