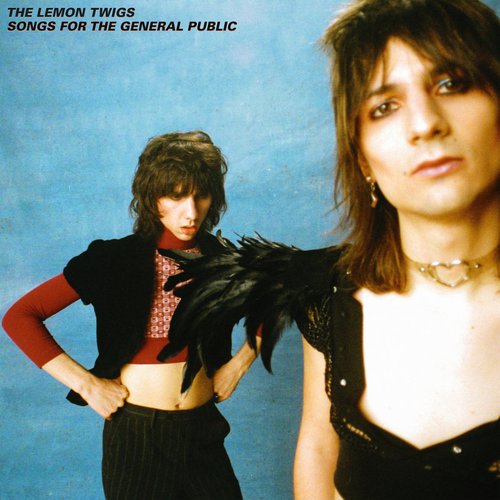 While 2020 has been a pretty terrible year for everyone, there have been some good things to come out of it. For me, The Lemon Twigs’ new album ranks on top of that list.

The Lemon Twigs are brothers Brian and Michael D’Addario, ages 23 and 21, respectively. The musically-prodigious band got their start with 2016’s Do Hollywood, which was produced by one-half of Foxygen/hot-in-demand producer Jonathan Rado. This album received acclaimed reviews, and the band quickly gained a great reputation for their live shows. 2018’s Go to School followed. The musical tells the story of a chimpanzee who is raised as a boy, and features collaborations from Todd Rundgren, Natalie Mering (Weyes Blood), and Jody Stephens of Big Star. Go to School quickly became one of my favorite albums of the decade and The Lemon Twigs became one of my favorite bands. Immediately after hearing Go to School, I was curious as to where the band was heading next. Cue Songs for the General Public.

Songs for the General Public is the band’s third studio album. Written, recorded, and produced by the pair at their home studio in Long Island, Sonora Studios in Los Angeles, and Electric Lady in NYC, the album was originally scheduled for release in May but was pushed back to an August release due to the pandemic. During the four month gap created by the delay, the brothers went back and fine-tuned the album’s production and even re-recorded a track ("Fight").

Kicking off the album, "Hell On Wheels" struts into frame with imagery of Black Eldorados "ripping through the street." The track features a sublime violin arrangement that trades off with guitar riffs, building up to what is quite possibly the band's biggest chorus yet. Michael's vocals are eerily-similar to those of Mick Jagger (presumably intentional) and the instrumentation of the song sounds like something off John Cale's Paris 1919. There’s even a choir on the chorus.

The band described "Live In Favor Of Tomorrow" as a "euphoric dance in the clouds which brings you close enough to God to slap him five." I couldn't think of a better description for this song. This is easily one of Brian's best and catchiest songs yet. The chord progression is pure ecstasy, the melodic bass lines are insane, and Brian's lyrics are some of his most emotive yet. The following track, “No One Holds You (Close Than The One You Haven’t Met)” is also ridiculously catchy. Brain lays it down on a Moog, the background vocals are insane, and the song is destined to get stuck in your head. The track sounds like something Roy Wood could’ve written, but it’s also completely fresh and innovative.

“Fight” describes the struggle of cutting off toxic relationships. This song is filled with handclaps and a driving groove. It’s incredibly catchy. According to a Reddit AMA, the band recorded over 16 versions of the song and changed the final version of the song after the album was delayed. The originally-planned version of the track, which is featured on first pressings of the album, features Bruce Springsteen-esque sax, has a slightly slower tempo, and is in a higher key. I personally prefer this original version, but also enjoy the tighter, punchier feel of the updated version (which is present on streaming platforms and will be placed on future pressings of the album).

“Somebody Loving You” is filled with layered keyboards and is one of the poppiest, most immediate tracks on the album. This track could’ve been released by Stevie Wonder in the 70s and been a chart-topper. Second single “Moon” features a massive Springsteen influence, with howling harmonica, saxophone, and a let’s-get-of-this-town narrative. Lyrics in the chorus feature Michael comparing the moon to a toenail. Strange, but I dig it.

“The One” kicks off the album’s B-side and is one of the album’s highlights. Brian reflects on the fleeting nature of relationships over an instrumental that sounds like it could be the theme song of a 90s sitcom (in a good way). The soaring, staccato cellos in the chorus are brilliant.

"Only a Fool" is my personal highlight from the album. An experiment in constantly-changing time signatures and jazzy chords, the track sounds like Rush if Brian Eno and Todd Rundgren had joined the band and decided to play Bill Wurtz chords. While it might not appeal to everyone, it’s an incredible feat and I can’t wait to see if the band dabbles in more progressive songwriting on future work.

“Hog” might be my favorite Michael song yet. Michael vindictively describes a former lover (“You once were an angel full of glitter, now of shit”) over a symphony of saxophones, bells, and flutes. The track transitions from beautiful verses and choruses into a ridiculously ugly bridge, an incredibly effective way for Michael to convey his disgust.

“Why Do Lovers Own Each Other?” is a completely electronic affair, featuring a symphony of 70s analog synths. Musically, the track sounds like Brian Wilson performing in the Main Street Electrical Parade. It’s ridiculous, yet brilliant.

The album closes with “Leather Together” and “Ashamed," both of which are penned by Michael. While enjoyable, these tracks rank as my least favorite on the album. “Leather Together” is a catchy, sleazy, punk-influenced track, but doesn’t stand out as anything too special. “Ashamed” is a Velvet Underground-y ballad that starts off pretty mellow but grows and grows into a wall of feedback. Musically, the track is enjoyable, but its lyrics about incest leave a bad taste in my mouth. Every time I hear this track close out the album, I find myself scratching my head.

As a whole, Songs for the General Public blows me away. It’s the band’s most accessible work to this date, yet it’s filled with ambition and experimentation. Lyrically, it finds the brothers at their most personal and vulnerable, which are qualities that weren’t as present in their previous material. The Lemon Twigs are prone to wear their influences on their sleeve, but I found their music to be far from pastiche - they take their influences, mix them all together, and use them to create something new and innovative.

While it’s far from perfect, Songs for the General Public is a great album that marks an important evolution in The Lemon Twigs’ career. I can’t wait to see where The Twigs go next.

Recommended: No One Holds You (Closer Than The One You Haven't Met), Moon, The One, Hell on Wheels, Live in Favor of Tomorrow