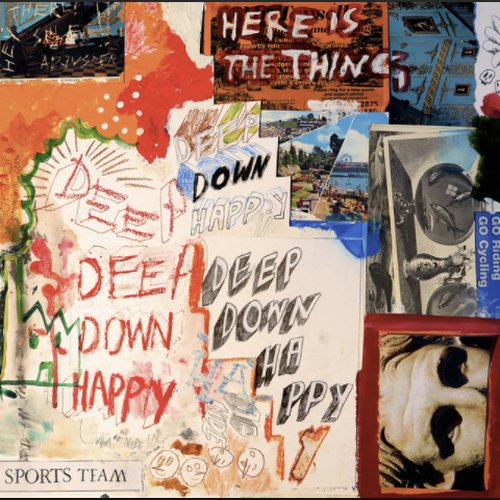 Until listening to this album, my understanding of indie rock band Sports Team was completely informed by their 2019 song M5. In this single, their overly cheerful lyrics and instrumentation make you suspicious that things are about to go seriously wrong for the man driving on the M5 in the song - as they do, when the man crashes his car. With this turn, the mood of the instrumentation doesn’t change at all. A casual listener would have no idea how tragic the song is.

So, with their debut album Deep Down Happy, I felt that I was listening to an album - although with less pop touches than M5 - that is true to Sports Team’s ability to irreverently expose the tragedy in everyday life while maintaining their unflinchingly upbeat indie rock instrumentals; they touch on topics like death, life’s repetition, feelings of meaninglessness, and being an outsider in suburban life without a second glance. While reading through some of the album’s lyrics to write this review, I would guess that they would be paired with a more boygenius-esque, somber sound instead. With this clash between a high-energy indie rock sound and despairing lyrics, their point seems to be driven home even more strongly - when they get caught up in the bustle of life, they can almost forget the tragedy within.

This can be seen throughout the album, with lyrics like these interspersed with descriptions of life’s repetition and the mirage of something better coming:

“Oh, you’re a tiny bit old for this / Don’t you think, it’s gonna get better / Before too long, or if it doesn’t I guess / You’ll be six feet under / Wearing your nicest” - Lander

All in all, with Deep Down Happy, Sports Team has created an album that's both fun to listen to and an impetus for self-reflection. I strongly recommend it.

Recommended: Stations of the Cross, Here It Comes Again, Here's the Thing, The Races, Born Sugar